Cousin Bette is so cold, so grimly repressed, it's a wonder she doesn't explode, littering the Parisian landscape with bits of starched black silk and coiled raven hair. A physical study in black and white, Bette (Lange) is an emotional riot of color. You sense it in the sudden, anticipatory movements she makes, like a dull black bird whose wings conceal a flash of cochineal. If only she could fly, we would be struck by her grace and brilliance. But her outward plainness, her reduced circumstances, have relegated her to a social cage for poor relations. When her beautiful cousin Adeline Hulot (Laurie) dies, Bette senses her chance for escape. She soars toward the open door only to have it slammed, humiliatingly, in her face. The widower Hulot, it seems, wants Bette to stay on, not as a replacement wife, but in servitude, tending to his spoiled, grown children and the bothersome affairs of his crumbling household. Bette instead retreats to her life as a costumer for a burlesque show starring the lusciously lewd songbird of Paris (and mistress of Hulot), Jenny Cadine (Shue). When Bette falls in love with the young, starving sculptor in her tenement and saves him from self-destruction, she can't help boasting about him to young cousin Hortense (Macdonald), who promptly sets her sights on the dashing and romantic figure. Once again, Bette is dismissed by the Hulot family, whose beauty, aristocracy, and pretensions to wealth give them everything she cannot have. And in Paris, in 1846, a plain woman of no means has only one recourse: Machiavellian revenge. Bette spares no one in her quest for vengeance. Based on one of the novels comprising Balzac's The Human Comedy, Cousin Bette is wickedly funny, passionately sensuous, and so bitterly cold it makes you gasp for breath. Lange is remarkable as Bette. You long to loosen her hair, to smooth her frown, to soften that grimly austere composure. Her severity is so compelling that you watch every small motion, every slight expression seeking some sign of human warmth or even frailty. By contrast, all the other characters are soft, and silly, and selfish, and totally unaware that their brilliant plumage makes them conspicuous targets. Bette, by her very plainness, is free to manipulate and deceive. She simply does not command enough respect for anyone to notice or suspect her duplicity. She, and we, get a delicious and somewhat sadistic private amusement from watching the upper crust get their just desserts. Aided by a clever script, sumptuous set design, gorgeous cinematography, and a wonderful cast, the Tony Award-winning director McAnuff has fashioned a grippingly entertaining film. Not a movie for the soft of heart, Cousin Bette takes you by the Balzac from the opening scene and never lets go. 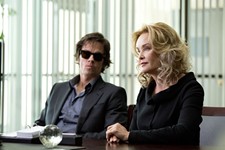 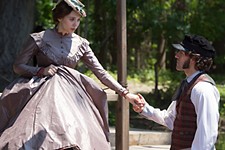 In Secret
Émile Zola’s Thérèse Raquin gets another film adaptation, this time in English.