This much-delayed Austin release of Danish director Bornedal's remake of his own Nattevagen oozes malfeasance like a sluggish aerial wound, but its too-frequent reliance on horror film clichés leaves it lacking the Seven-ish punch it's obviously aiming for. Co-scripted by Steven “Master of Oblique Career Moves” Soderbergh, Nightwatch posits the lank-haired McGregor (Trainspotting) as college student Martin Bells, who takes a job as the lone night watchman at the local morgue to help defray tuition costs. Bad idea. Not only is his new place of employment rife with vats of severed feet and creepy necrophiliac overtones, but the head duty doctor is Brad Dourif, a sure sign something godawful is about to happen. As if that weren't enough, a serial killer with a penchant for ocular exenteration is making the rounds and conveniently using the somewhat sheepish Martin as his patsy. That attracts the attention of Inspector Cray (Nolte), a grizzled, hard-boiled copper who studiously embarks on a mission to make the poor morgue attendant's life hell. Orbiting this semi-trio are Martin's girlfriend Katherine (Arquette), whose chief complaint seems to be about her man's rank, formaldehyde breath, and his best friend James (Brolin), a Peter Pan-complex adrenaline junkie who gets his kicks initiating barroom brawls. If you pay no heed to Bornedal's conflicted story and focus instead on the film's gorgeous visuals, it's a wild, nocturnal horror show. Cinematographer Dan Laustsen has a way with underlit sets (although, it ought to be said, post-Seven, everyone seems to have a way with underlit sets these days). Recurring motifs such as the eerie, plastic-shrouded pine trees that stand sentinel outside the morgue's front entrance and the moth-battered safety lamps that ring Martin's shadowed desk are chilling, and the whole film appears double-dipped in an unhealthy, jaundiced pallor. McGregor acquits himself admirably here (nice Yank accent), but Arquette and Brolin seem as though they're off in their own private universe. The same could be said for Nolte -- nice ham sandwich -- but like Dourif, Ol' Gravel Voice is a kick to watch when he's pulling out all the stops, if a bit ridiculous. None of this accounts for why the Dimension Films division of Miramax has been sitting on the film for over a year and a half. It's certainly no worse than half the stuff playing the multiplexes at the moment, nor is it an embarrassment to anyone's career. It's gritty, nasty, predictably meat-and-potatoes suspense, but genuinely gonzo fun nonetheless. 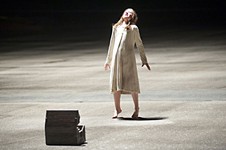 The Possession
A divorced couple reunite in their efforts to save their daughter from an evil spirit.