Two-time documentary feature Oscar winner Barbara Kopple (American Dream, Harlan County, USA) has quite unexpectedly turned her camera from the recording of labor disputes to this film portrait of Woody Allen. Ostensibly commissioned as a document of Allen, the Dixieland jazz clarinetist on tour in Europe with his seven-man band, the film is so much more than that. Although it spotlights Allen's musicianship rather than his filmmaking, Wild Man Blues is not really a concert documentary. Yes, we see the band onstage in various European capitals, but rarely do we see and hear a tune performed all the way through. What Kopple and her longtime cameraman Tom Hurwitz are interested in capturing is the inside view of Woody Allen, the celebrity artist. And that they did. Apparently allowed total access to Allen and his traveling companion and soon-to-be wife Soon-Yi Previn, the film presents a remarkable compendium of the famed neurotic's quirks and foibles. We learn that he also books the suite next door to whatever hotel room he finds himself so that he can have his own shower; we see him fret over the mass gathering of fans outside his hotel room and we see him fret over the thought that the shows will be ill-attended and he will be hated by those who do come; we hear him quip about such things as his fear of Norman Bates-like concierges and how Bologna might be a lovely town with a couple of Valium; we listen to him look out over Rome and muse about Fellini or speculate about why his films are more popular among Europeans than Americans. Yet with a performer as camera-seasoned as Woody Allen, we might fairly expect that very little of what we are witnessing is truly unguarded and unintentional. However, Kopple's previously demonstrated capacity for assuming the proverbial fly-on-the-wall perspective serves her well in this documentary. The most revealing aspect of the movie is in the details it shows of the Woody/Soon-Yi relationship -- and, face it, that's what most of us are really coming to see. Far removed from the lurid scandal trappings that have colored their affair (and marriage), the couple appears to be a comfortably balanced duo. She, more often than not, assumes the role of adviser, organizer, and comforter. It is Soon-Yi who can counter his neuroses with practical retorts or bemused indifference, get him out for a gondola ride or a dip in the pool, and sway him to act more animated during his music performances despite his avowed disagreement -- although it is momentarily chilling to hear her declare Manhattan to be her favorite Woody Allen film and cite Annie Hall as a film she's never seen. Their relationship may be met with scorn on the world stage but, hey, it works for them and that's all that they've ever contended. Wild Man Blues seems to bear this out. A concluding segment at the home of Allen's parents is shot in a different style and feels totally tacked on, but once you have it on film (even if it was obtained with a little obvious goading) it's understandable that you'd want to use footage of Mrs. Allen wishing that her son would marry a nice Jewish girl and Mr. Allen bemoaning the fact that Woody chose not to pick pharmacy as a career. Wild Man Blues is thoroughly fascinating and is must-see viewing for any Woody Allen fan. Barbara Kopple, on the other hand, should get back to pointing her lens at more significant social phenomena. 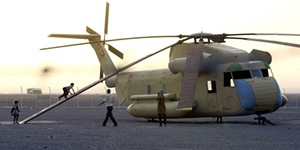 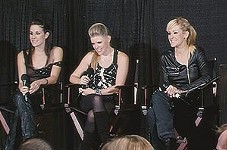 Shut Up and Sing
The Dixie Chicks' struggle with the conflicting demands of art and commerce as portrayed in this documentary shows that they're still not ready to make nice.