Is The Truman Show really the subversive film that all the advance hype would have us believe or is it merely this season's new way of spelling Gump? Well, it's a little of both, though more of the latter -- a movie which couples a captivating premise with a naïve rube protagonist to create the illusion of having witnessed a penetrating study of American values and culture as seen through the eyes of one of its innocents. In The Truman Show life isn't a box of chocolates, it's a 'round-the-clock “reality” TV program which beams its nonstop signal worldwide. And Truman Burbank (Carrey) is its unwitting subject/hero/leading man. Without his knowledge, Truman has been filmed since the day he was born, and the execution of this high-concept premise is The Truman Show's most audacious trick. Truman's hometown of Seahaven, a pristine and visually adorable, planned, island community, is actually the world's largest soundstage and all the town's citizens are mere players on its stage -- each inhabitant is a Truman Show actor fitted with a discreetly hidden body cam. Despite his fake environment, Truman has somehow evolved into a “real” human being with “real” human emotions and it's that sense of veracity in action that keeps the world hooked on the soap opera of his life. Of course, a man in a control booth is running the show. The godlike producer/director/mastermind/wizard of Seahaven is a character of intriguingly complex motives named Christof (Ed Harris, in one of the best performances of his career). At its best, The Truman Show is a compendium of trenchant and funny observations about modern consumer culture, the homogeneity of a world united by its satellite dishes, and the extent to which autocracy can serve artistic ends. Written by New Zealander Andrew Niccol, The Truman Show shares similar thematic concerns with Niccol's other notable project, Gattaca, the futuristic cautionary tale about the limits of individuation and totalitarianism, which he wrote and directed. The Truman Show is funnier however, and not just because of Jim Carrey's presence. The movie assumes a disconcerting stance that intentionally teeters between comedy and Twilight Zone-like nightmare. It's unusually provocative and challenging for a Hollywood movie and, surprisingly, allows the audience to piece things together without too much external direction. However (and this is something you don't hear me say too frequently), the movie could stand to be a little longer. It has too many loose ends and too many logically unexplained phenomena that can only be rationalized away with generalizations about the all-encompassing control that typifies the Seahaven production. Why is it that after 30 years in Seahaven, Truman is only now noticing Klieg lights that fall from the sky and weather patterns that follow his precise footsteps? Is Seahaven breaking down something like a Mir space shuttle that's been in orbit too long? Also, for all the talk of Carrey's toned-down dramatic performance here, it is, though serviceable, still awfully broad and hammy (as is Linney's, yet as Truman's wife it should be said that she's always aware that she's playing to a hidden camera). His behavior is that of an insanely cheerful overgrown kid -- too exaggerated to be believable as the world's most famous “real” person and too limited to convey the psychological turmoil he experiences as he begins to suspect that the whole world revolves around him. Always amazing to look at, conceptually compelling, and entertaining, The Truman Show still seems to promise a bit more than it delivers. (For an earlier take on this ominous plotline of a person who suspects that the whole world is privy to a film of her life, find a copy of Paul Bartel's 1965 knockout short film, “The Secret Cinema,” which was later made into an Amazing Stories episode.) The question you have to ask yourself about The Truman Show is the same one you have to ask of most network television broadcasting: Would you ever want to see it again in reruns? 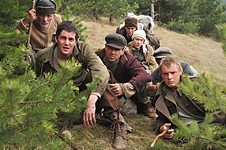