It must be rough being Kenneth Branagh. Eventually, the poor guy's going to run out of Shakespeare to work with, and assuming that, he must have signed on to this convoluted, neo-gothic, faux-feminist folderol hoping that those with limited literary acuity might mistake it for one of the Bard's more esoterically silly works. Nice try, Ken, but The Proposition's wild mix of Virginia Woolf politics and romance-novel “wouldn't it be wild if…” plotting don't even ring Bacon's bell, much less big Bill's. Chock-full of those annoying coincidences that make for distracting PBS fare, this big-screen version of something that should never have even made it to the small screen is by turns charming in its consistent goofiness and ludicrous beyond belief. Set in the none-too-roaring Thirties, Hurt and Stowe play Arthur and Eleanor Barrett: He's a millionaire investor with a penchant for funding the nascent Nazi party, and she's a free-thinking feminist writer with a penchant for quoting the above-mentioned Woolf and making idle comments about the tedium of waiting around for women's suffrage to crop up in her social strata. They're desperately trying to sire an heir, but Arthur suffers from the dreaded lazy sperm, and so, in a misguided act of husbandly duty, he has his toady (Loggia) hire a young stud to act as a surrogate peashooter. The family servant Syril (Danner) wisely advises against this course of action, but Eleanor has already marked her calendar, made the bed, and lighted the candles before the chosen buck arrives. In a sublimely oddball bit of casting, who should it turn out to be but Doogie Howser himself – Neal Patrick Harris. As the discombobulated replacement driller Roger, Harris is actually quite good, full of nervous energy and wilting pride. When young Roger falls madly in love with Eleanor and then turns up dead, well, you can imagine the hideously goth consequences of all this mucking about. And that's just the first 20 minutes. Branagh arrives soon after as the new priest on the beat who already has a disturbing familiarity with the Barrett clan and their shady servant Syril. It all becomes a crazed genealogical comedy of terrors after a certain point, with the various characters falling in and out of lust and love, and suddenly realizing that they might all be related in some awfully lower-class way. The Brontes couldn't have come up with a more convoluted plot if they'd written it themselves, but alas, that job fell to screenwriter Rick Ramage, who tosses in everything and then some in a misguided and ultimately vain attempt to make something, anything, matter. On the acting front, it's nice to see Hurt's restrained, internally seething performance as the tormented, seedless househusband, but Stowe, unfortunately, is less than interesting. Branagh huffs and invokes and looks fine in his miter but nonetheless is reaching for something that's just not there. It would have made a fine satire, I think, but The Proposition plays it straight, and in doing so topples into unintentional comedy far too often. 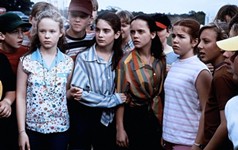 Now and Then
Set predominantly in the summer of 1970, this film tells how four 12-year-old girls save their money to buy a room of their own in the form of a treehouse from Sears.