Indie-darling Tom DiCillo (Living in Oblivion) fails to capture the hearts and minds of his core audience in this fourth film which is nearly as meandering as his last (Box of Moonlight), but this time out draws upon a much larger canvas. It's such a large canvas and filled with so many players that any emotional or even comic resonance the director may have been going for is lost as the film ricochets between its many stories and characters. It makes for a very crowded movie that babbles endlessly without ever saying very much. Modine plays Joe, a 35-year-old New York City actor and part-time waiter who is so busy griping about his artistic integrity that he's permanently out of work. Anyone who's ever shared loft time with someone in that position can attest to just how annoying the situation can be, as can Joe's girlfriend Mary (DiCillo regular Keener), who's also worried that their sex life is on the outs as well. DiCillo's daisy chain of circumstance and low-level comedy leads us through Joe and Mary's lives, which in turn introduces us to the other players, among whom are Joe's sex-hound acting buddy Bob (Caulfield) who's on a quixotic search for “a real blonde”; Bob's newest conquest, the shallow, blonde, and Little Mermaid-obsessed underwear model Sahara (Wilson); Bob's other newest conquest, actress Kelly (Hannah); and Joe's cynical casting agent Dee Dee (Turner). All these strands -- and many more -- are woven into an intricate skein of interpersonal relationships from hell. If nothing else, The Real Blonde is apt to make you feel better about your own love life, but DiCillo's habit of appropriating the subatomic particles of day-to-day existence and then mashing them into light comedy is beginning to wear a tad thin. The dozen-odd encounter group couples we get here are shuffled in and out so hurriedly, and back again, that it's all you can do to keep up with their trials, schemes, and waylaid plans. And then, in the final reel, when things begin to pick up and look hopeful for Joe and his pals, it's all you can do to care. DiCillo has always had the laconic, funkified, vaguely surreal air of a Woody Allen on cough medicine (or a Jim Jarmusch on Jolt, for that matter), but The Real Blonde is just so much ado about nada. His final epiphany, that love may yet conquer all, is as worn as Joe's stillborn street cred, and in the end it's all just a lengthy, slightly-less-smarmy version of Seinfeld. 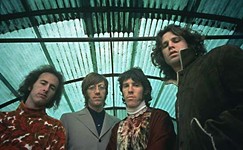