Hope doesn't float in this film so much as it rises to the surface and then stagnates. This romantic drama has an engaging premise and starts off with a promising opening sequence but then slumps into a flat, familiar routine. Hope Floats tells the story of Birdee Pruitt (Bullock), a former small-town beauty queen whose husband has cheated on her with her best friend. Birdee learns the life-altering news during the film's compelling opening moments. Lured to the taping of a daytime TV talk show by the promise of a free makeover, Birdee is led blindfolded onto the set whereupon her best friend (Rosanna Arquette in an unbilled cameo) tells her of the affair with her husband. With her embarrassment beamed coast to coast on national television, Birdee retreats with her young daughter Bernice (Whitman) to her home town of Smithville, Texas (the neighboring Austin town where the movie was actually filmed). Birdee moves back in with her mom (Rowlands) and is faced with the dilemma of starting life anew. It's enough to make her hide under her bedcovers, but the encouragement of her kooky but wise mother and the needs of her wise but inexperienced daughter draw Birdee out into the world of the living. There's also the allure of Justin Matisse (Connick), the first boy Birdee ever kissed and who just coincidentally still happens to be single, hunky, and head over heels in love with her. There's very little drama or tension to impede their slow courtship. On a pure narrative level, it may be fair to wish for more grit to the romance but on an emotionally superficial level the teaming of Bullock and Connick is picture perfect. The two of them combine to make a very handsome couple. Individually, each of them has an ingratiating presence; together, they create a near irresistible force. Yet no conflict in the storyline warrants the 90 minutes they spend sniffing each other out before giving in to the big release we all know is coming. It's as though they're waiting to exhale or something. Perhaps it's this held-breath tendency that will be the hallmark of Forest Whitaker's directorial career. (Hope Floats is his follow-up to Waiting to Exhale.) He elicits undeniably good performances from his actors, but his visual sensibilities are perfunctory and border on cloying. Hope Floats' thematic undercurrent of small-town salvation is accentuated by the oh-so-pretty camerawork of Caleb Deschanel (The Black Stallion, The Natural). Plaintively slow dissolves encourage us to linger with the sights much longer than we would otherwise be inclined. If there were more developments in the plot, these country cornucopia moments might be less tiresome. (Some suggestions include the under-utilized introduction of Birdee's Alzheimer's-stricken dad in the retirement home and the inadequately explained presence of her nephew Travis.) Love, divorce, mother-daughter conflict, and one death all receive screen time in Hope Floats, but they occur as if on cue and without resonance. Hope floats and time passes. 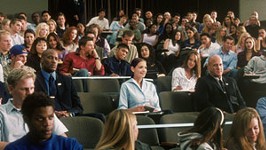 First Daughter
This movie's tortured young protagonist and clueless dad just happen to be members of the First Family of the United States.