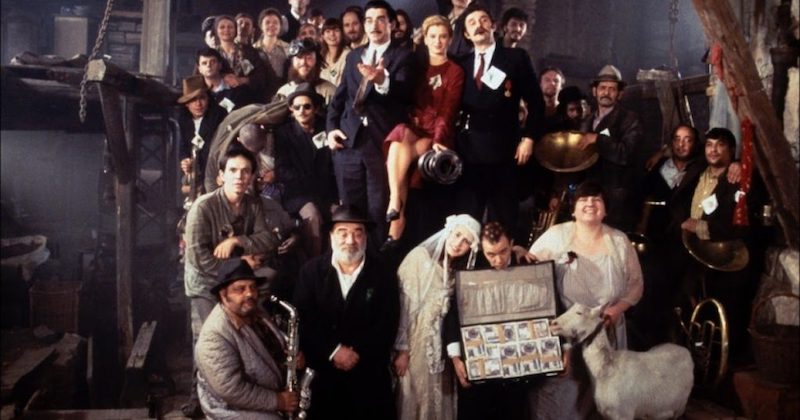 Winner of the Palme d'Or at the 1995 Cannes Film Festival, this sprawling, epic tale of life during wartime is just now making it to our shores. Be thankful -- it's one of the 10 best war films I've ever seen, and it's not even about war per se. It's much more about Yugoslavia and its tortured history since WWII, as Kusturica follows the lives of three star-crossed lovers across the last five decades. At almost three hours, it's a masterwork of brilliant editing and design; not a frame is unwarranted, not a scene excessive, and it holds together over its lengthy running time in a way few films half its length can manage. The film's opening scenes, during which the Germans commence their extended bombing of Belgrade and, more specifically, the city's zoo, are some of its most shocking. Lions and tigers and bears flee the carnage and head out unfettered into the city as zookeeper Ivan (Stimac) weeps amongst the ruins. He's the younger brother of Marko (Manojlovic), a budding war racketeer and bon vivant who soon takes the proverbial bull by the horns and, with the aid of his boisterous friend Blacky (Ristovski), embarks on a prosperous string of jobs within the black market underground, supplying guns where needed and generally working with the support of the partisan masses to strike back at the fascists. Into this heady mix comes Natalija (Jokovic), a beautiful Serbian actress loved by both men. When Blacky is arrested by the SS, Marko wastes no time in making Natalija the object of his affections, mirroring the traitorous nature of the battleground outside their door. Still, he eventually rescues Blacky and hides him in his cellar along with his brother Ivan and a host of others whom he puts to work making munitions. It's all in the family until the war ends and Marko neglects to tell anyone down below, continuing his profitable ruse for the next 15 years, aided and abetted by recordings of air-raid sirens, bombs, and Natalija. And then, one day, everything falls apart, and from there, it gets worse, climaxing some 45 minutes later with one of the most wrenching final scenes you're likely to see in a good while (followed, perhaps unnecessarily, by a heavenly coda, which against all odds actually works). Not by a long shot is this similar to anything else you've seen lately, unless you've been to a few Buñuel, Peckinpah, and Raimi films simultaneously. Kusturica (When Father Was Away on Business, Time of the Gypsies, Arizona Dream) crowds his images with hyperactive details, be it the ever-present brass bands or the lurking shadows of Tito and fascism. High drama and low slapstick collide on an almost existential level; Underground is surreal chaos tamed into subservience. And Kursturica's cast is superb, emotional, rowdy, terrified, all at once and once for all. It's a heady mix, charmingly idealistic and bracingly clear-eyed, powerful and sad, and it sticks with you, and in you.