Patrick Swayze does some “dirty driving” in this routine trucker tale. There hasn't been a good truck-driving movie on the horizon since the glory days of CB radios and convoys. Black Dog does nothing to alter that situation. It's the kind of movie that gives good trucker movies (i.e., Jonathan Kaplan's White Line Fever, Sam Peckinpah's Convoy, Steven Spielberg's Duel and Hal Needham's first Smokey and the Bandit) a bad name. A butched-up Swayze plays Jack Crews, an unlicensed trucker hauling an illegal shipment of AK-47s from Atlanta to Newark, New Jersey. Jack used to be one of the best truckers around but then he pushed too far and saw the Black Dog – the apparition reportedly seen by sleepy truckers at the end of the line. Jack's run-in with the Black Dog caused the death of two individuals. Now, after serving two years in prison, Jack has been released, minus his license to operate a rig. All he wants at this point is to do right by his wife and young daughter. But the bank is trying to foreclose on his house and his boss wants him to drive just this one illegal shipment, so what's an earnest, well-intentioned guy to do? Director Kevin Hooks demonstrates his massive versatility as he switches from the airplane action of Passenger 57 to the truck theatrics of Black Dog. The script by William Mickelberry and Dan Vining woefully slides by on autopilot and sports some of the worst dialogue this side of Quest for Fire. Lots of trucks get blown up real good (especially when colliding with trains or hurtling off cliffs). Swayze maintains a stolid, low-key presence throughout but it seems, well, too stolid and low-key for someone caught in the eye of this death run. Randy Travis has a tongue-in-cheek good time with his role as a trucker who writes tuneless country songs in his abundant spare time. Meat Loaf, on the other hand, as the gospel-spouting bad guy and sputtering loon, plays a character more tired than yesterday's meatloaf. The usually reliable Charles Dutton and Stephen Tobolowsky are utterly wasted as the squabbling FBI and ATF chiefs in charge of the mission. Black Dog is best kept on a short leash. 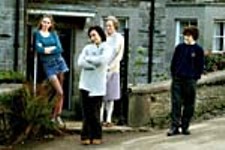 Dirty Dancing: Havana Nights
The story is similar to the popular original – but its Borscht Belt setting has been relocated to pre-revolutionary Cuba in 1958.