Surely there's more to life than choosing Mr. Right; that is… unless you happen to be a woman stuck in an Edward Burns movie. Actually, the men in No Looking Back have pretty limited interests and activities as well. Everyone in this film's wintry oceanside East coast town (an amalgam of the Rockaways on Long Island and the Jersey shore) is a hard-working, blue-collar laborer who works overtime shifts and relaxes by kicking back a few with friends and loved ones at the local tavern. It's as though they were all characters in a Bruce Springsteen song, and indeed several songs by New Jersey's poet laureate dot the soundtrack. Ever since the extraordinary success of his first film, The Brothers McMullen (an extremely low-budget production that reportedly became the most profitable film of 1995), triple-threat writer/director/actor Burns has been unjustly saddled with the attempt to best himself. He didn't achieve it with his sophomore romance She's the One; he's not likely to have much more box-office success with the muddled No Looking Back. Though the acting is solid and the physical milieu is evocative, the characters are thin and unbelievable. Holly plays Claudia, a woman in her early 30s who works as a waitress in a diner and has a longstanding relationship with her live-in boyfriend Michael (Bon Jovi). Michael's cute (he's Jon Bon Jovi, after all), he's very hard-working, he's dependable, responsible, and hot to marry Claudia, but she, for some reason, deflects his proposals. The film opens as Charlie (Burns) climbs off a bus and back into the town he left without a word three years ago. No one's too excited to see him this time around -- not his mother, not his old girlfriend Claudia, and not his old best friend Michael. Before long, this part-time gas station attendant is hitting on Claudia again and she's just bored enough with her life (and the fearful certainty of its dull future) that she pays attention. Exactly what she sees in this ne'er-do-well who abandoned her once and now has only vague promises of making a fresh start in Florida is unclear. Burns is wonderful as the seductive bad boy, but by casting himself in this role he leaves little doubt as to the story's ultimate narrative progression. Holly, however, imbues Claudia with too much intelligence to make this story about a woman with zero options believable. As supporting family characters, Danner as Claudia's mother and Britton as her sister provide some of the film's edgier moments. With this third film, Burns for the first time has scripted a romantic tale from the perspective of a woman but again the dramatic arc is reduced to nothing more complicated than He's the One. 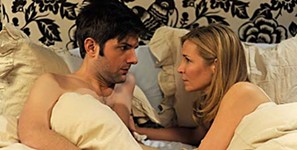