Grab those hankies and bottomless popcorn tubs, fellas; there's a new entry in the burgeoning field of pastie-whirling stripper flicks cum social commentaries. Pardon me if I sound a tad cynical about the motives behind this directing-writing debut from L.A. hardcore rapper Ice Cube. It's just that these movies (lump TPC in with the likes of Striptease and Showgirls) are so blatantly intended as virtual lap dances for guys who like their onanistic fantasies served with Skittles rather than buffalo wings that any other response would seem naïve. That said, Cube still earns a Breast of Show by -- as they say in the rap biz -- keepin' it real. His heroine, a bodacious yet initially innocent shoe clerk named Diamond (Raye), seems like a person we've met before. Her jump from ringing up Manolo Blahniks to grinding onstage in a funky downtown rut-room is a believable extrapolation of words many frustrated, underemployed women have spoken: “Screw this, man! If I'm gonna humiliate myself at work maybe I should at least do it at the strip joint and make myself some money!” More respect is due the director for portraying the “girls” as regular people with kids, boyfriends, parents, and college exams to study for. By contrast, the women of Showgirls seemed more like soulless fembots writhing in a gleaming celestial masturbatorium -- a definite hindrance to both credibility and lust appeal. I'm also partial to Mr. Cube's avoidance of moral judgment regarding the “anything for da long green” ethic alternately espoused and condemned by his characters. Honestly, serious intent aside, the truest reference points for this aimless and amiable story are raunchy guy-comedies such as Mo' Money and House Party, along with blaxploitation classics like The Mack. By far the most enjoyable scenes arise from a farcical side plot involving efforts by the club's rascally owner (Mac) to dodge his well-armed creditors. Violence, suffice to say, gets equal billing with sex. A ballistic arsenal of D-Day proportions gets squeezed off, often at close range, but miraculously nobody dies. Likewise, few of the gruesome, face-crunching fight scenes leave physical traces more lasting than Elmer Fudd's cartoon mishaps. The only truly disturbing moment is an incongruously vicious rape that is played out of view. This is probably all for the best. Any content that really aspired to greater gravity would surely have been nullified by the shocking dearth of acting talent on hand. For all her hella slammin' looks, Raye is a direly limited actress. And apart from Mac's uproariously gonzo raving and Wilson's campy gusto as the club's evil lesbian alpha stripper, this would be a lock for worst-acted film of the year. Still, within the realm of salacious funny-boner movies, the coming summer will surely deliver far worse than The Players Club. Unsettling thought, that. 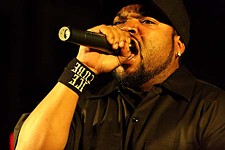