One of the most original filmmakers working today, John Sayles never takes the easy way out when he can take a more interesting -- if convoluted -- one. From Matewan to City of Hope to the brilliant Lone Star, Sayles has proven himself time and again a master of story, structure, character, and conflict, and this new addition to Saylesiana is no different. Alright, I take that back -- Men With Guns is different, in its use of magical realism, repeated flashbacks, and the fact that it's almost entirely in Spanish, but it's still very much a John Sayles film, from its frequent use of deeply layered symbolism to its lush photography and deep, abiding emotional core. Luppi (perhaps best known as the old man in Cronos) plays Humberto Fuentes, an aging physician in a large, unnamed Latin American city who is approaching retirement. Some time before, he trained a group of young doctors as part of an international program to provide care to the poor and disenfranchised who reside deep within the heart of the jungles and the tiny, economically ravaged communities that dot the southern landscape. When he runs into one of his former students -- now supplying drugs to the city's youth -- he decides to embark on a cross-country quest to discover what happened to his former charges. Despite the protestations of friends and family, he sets out to Rio Seco to find his first contact, Cienfuegos. Once there, he is told by an old peasant woman that the doctor was killed by “men with guns.” Who are these men, why are they carrying guns, and, more important, why do they seem to control the whole landscape into which Dr. Fuentes has ventured? No one he encounters seems to have an answer that fits the question, though these men with guns appear to be everywhere, and as his trip wears on, Dr. Fuentes realizes that his students may all be dead. Along the way, he hooks up with an engaging street urchin, Conejo (Gonzalez), a broken priest (Alcazar), a hot-tempered ex-soldier who at first steals his tires and then acts as a guide (Delgado), and finally a young mute girl who has been raped by the men with guns. Sayles fashions a journey of exploration through the impenetrable jungle in search of truth, but comes up with a symbolic indictment of Men With Guns everywhere: the soldiers, the usurpers, the madmen who rule not only this unnamed province of the mind but also the real world. Sayles is calling into question everything from politics to religion here, and though some of the symbolism is obscure (not to mention the magical realism), it's a deeply moving, deeply personal film. Luppi is gripping as the fading healer, and the brilliant cinematography by Slawomir Idziak (Blue and more recently Gattaca) is wrenching in its lush, fuming beauty. Marred at times by occasional stretches in which the forward momentum of the story wanders off course to inspect the jungle and such, Men With Guns is still a powerful, riveting film, packed with subtle discourse and brimming with passion. 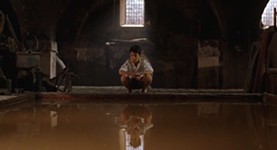 The Devil's Backbone
Set in a crumbling boys' school/orphanage/fallout shelter during the Spanish Civil War, the lost boys of this haunting film contend with a vengeful ghost as well as the more worldly traumas of war, greed, and abandonment.