You thought making sausage wasn't pretty. Next to making comedy, grinding up meat and stuffing it into casing is positively picturesque. That's the unsightly truth exposed in this latest work from landmark filmmakers Pennebaker and Hegedus (Rockaby, The War Room). They document the life of the backstage farce Moon Over Buffalo, which had a nine-month run on Broadway two seasons ago, carrying us through rehearsals, a tryout run in Boston, the New York opening, and, finally, the closing -- 300 performances later. What they reveal won't shock anyone with much experience in the theatre: It's work. Hard work. Hour after hour, for weeks on end, the artists struggle to define what will get the big laugh -- or any laugh. As a euphemism for lovemaking, which is funnier: “whooping it up” or “boffing”? Scenes pivot on such questions, and between the elusive nature of humor and the big bucks at stake in getting the show on Broadway, they generate the kind of intensity more typically associated with legal wrangles in a capital murder case. Tensions escalate as the key players -- playwright Ludwig, director Moore, stars Burnett and Bosco, and backer Landesman -- grow progressively more frustrated over parts of the show that don't work. Everyone suggests fixes, but the sensibilities of the various players are at odds, and some input only succeeds in fostering more friction. The degree to which Hegedus and Pennebaker capture on film this anxiety and conflict is impressive, but so is the weight they give to the efforts to amend, the complex negotiations over turf and contributions, and the reassurances that keep the show moving forward. This is no All About Eve wallowing in the clash of egos behind the curtain but a true tale of theatrical collaboration focusing on the give-and-take critical to a production's success. That becomes most clear in the scene in which a mechanical failure threatens to capsize a dress rehearsal in New York. While the crew fights to unfreeze a winch, Moore goes to Burnett -- who has repeatedly taken shots from the playwright and director for being “too TV” -- and asks her if she will entertain the audience through the delay. She graciously assents and completely charms the crowd. It's the film's most show-bizzy scene -- put-upon star heroically saves the day -- but it doesn't play that way. Pennebaker and Hegedus keep it in the context of the job of making theatre: all in a day's work. This is show business, they remind us, and they make that even more apparent when the show gets to New York, turning the lens more on Landesman, the veteran producer, who is shown shrewdly gauging critical reaction for its impact on his show's box office. Moon Over Broadway isn't as sexy as the political machinations laid bare in The War Room, but the film shares its predecessor's regard for the grueling work behind the scenes that makes a show happen, and its depiction of that work makes the show less glamorous but even more fascinating. 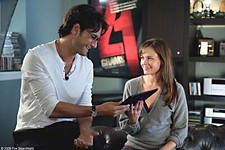 Annie
See it today, for tomorrow there will be another filmed version.