Staggering under the burden of noble intentions and a grant-funded charge to edify, this Anne Frank-inspired story of shattered innocence is artistically handicapped from the word go. The subject matter -- a tender-hearted Jewish teenager's first encounter with anti-Semitism -- packs an inherent emotional punch. Unfortunately, screenwriter Wendy Kesselman, on whose Ford Foundation-commissioned play this film is based, appears to have suffered from serious performance anxiety, troweling on enough leaden symbolism and gratuitous schmaltz to seriously undermine the tale's potential impact. Her protagonist is Daisy (Danes), a shy, bookish Manhattan prep school student whose emotional fragility makes her a literal and figurative equivalent of the flowers she picks with her widowed aunt Nana (Moreau), a survivor of the Auschwitz death camp. Even among her oddly anachronistic classmates (Kesselman seems to utterly lack any feel for modern youth culture, giving her teenagers the speech and demeanor of characters from an old Dobie Gillis episode), Daisy is a hopeless naïf. So when the gentile Adonis (Law) with whom she's enamored cools the romance after discovering she's Jewish, the effect is as brutal as a jackboot trampling a tender wildflower. And Hopkins and Kesselman play it just that melodramatically, using Nana's Anne Frank-like recollections and stock footage of WWII death camps to draw a specious comparison between the blond shitheel's snub and the Nazis' genocidal atrocities. Leaving aside the implausibility of Judaism being viewed as an exotic, inscrutable phenomenon in the heart of New York City, there really isn't much verisimilitude in the bald prejudice Daisy encounters. The very essence of bigotry's enduring power is its virus-like ability to mutate into subtler, more specialized forms as changing social conditions demand. However, the filmmakers' failure to acknowledge this fact is less ruinous than their maudlin representation of their characters' emotional lives. The relationship of Nana and Daisy is so infantile in its nature (every scene of gut-spilling angst seems to be followed by a ridiculous, cringe inducing one of the pair pillow fighting, playing Crazy Eights, or picking flowers in long, flowing dresses) that any revelations emerging from it are unavoidably trivialized. The superabundance of talent here makes I Love You, I Love You Not's affectlessness all the more mystifying. Kesselman, remember, wrote the script for Nancy Meckler's provocative, deliciously kinky Sister, My Sister. Danes can be a deeply affecting screen presence -- see William Shakespeare's Romeo & Juliet for recent proof. And, of course, the ability of the great Moreau (Jules and Jim, The Lovers) to illuminate emotionally charged material is beyond question. So the blame for I Love You, I Love You Not's maudlin, simplistic feel has to fall upon Kesselman and Hopkins, who for whatever reasons were unable to tap the deep artery of human truth flowing beneath their story's skin. It wouldn't be the first time that efforts to starkly define good and evil failed because neither is really all that easy to define in all their multidimensional complexity.

Brigsby Bear
A man searches for truth in nostalgia 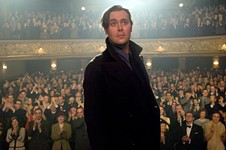 Me and Orson Welles
Richard Linklater has crafted a joyful period charmer about that moment before a boy becomes a man and another man becomes a mythological figure.

I Love You, I Love You Not, Billy Hopkins, Claire Danes, Jeanne Moreau, Jude Law