Even hardcore sequelphobes have to admit it's a pretty cool idea: a The Fugitive-redux manhunt movie focusing on U.S. Marshal Sam Gerard, Jones' stoically relentless flatfoot character from the original 1993 megahit. But somewhere between concept and execution, director Baird (a career bench-warmer whose previous résumé is heavy on film and sound editing) has managed to lose much of the gusto, nerve-shredding tension, and robust character development that set The Fugitive apart from the rest of the action/suspense pack. Ironically, the problem may lie in Baird and screenwriter John Pogue's over-eagerness to give us what they think we want. Whereas The Fugitive was in essence a two-man play in which Gerard and Dr. Richard Kimble (Harrison Ford) often appeared to share an almost psychic link, U.S. Marshals is all Jones' show. His quarry this time is Mark Sheridan (Snipes), an accused murderer of mysterious background and character whose internal life is as obscure as the contents of the sealed briefcases and boxes he's always lugging around. Unlike Kimble, whose innocence and decency are known from the beginning in The Fugitive, Sheridan is a total cipher to both Gerard and the audience until deep into this two-hours-plus film. Ergo, we can't be expected to give a rat's ass what happens to him -- and don't. More wasted acting talent (so to speak) is represented by 12-Step poster boy Downey, who plays an intelligence agent assigned to Gerard's team because Sheridan's victims were fellow DSS operatives. To an even greater extent than Snipes, he's basically furniture until the last 20 minutes or so. A further millstone that Jones and company must carry is Pogue's script which, like The Jackal and Mission Impossible, seems to drastically overestimate the mass action-movie audience's level of interest in computers, electronic surveillance devices, and other high-tech gewgaws. (Translation: Too much gazing into screens and not enough running, shooting, and leaping from high places.) What's truly amazing is that, even when forced to carry the entire movie on his back, Jones almost pulls it off. Like Robert Mitchum, Steve McQueen, the Eighties-era Rutger Hauer, Sean Connery, and a disparate handful of other thinking man's tough-guy stars throughout history, you almost don't need to provide him with a script. His ability to effortlessly convey masculine strength, humor, complexity, and a just-palpable dark side makes his mere presence in a movie sufficient reason to watch it. Stuart, say “Thank you, Mr. Jones. Thank you very, very much.” Now climb down off that director's dolly and get your dilettante butt back into the cutting room. For my part, I'll leave you readers with a steeply hedged check-it-out recommendation for U.S. Marshals and two crucial words: Blockbuster Video. 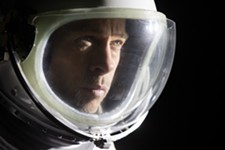