Everyone knows this is nowhere, this world of minimum-wage jobs, stultifying labor, and dead ends. Another day, another meal, and we keep coming back for more of the same- not by choice, not by habit, but of necessity. We work to eat, we eat to work; given these circumstances, playing the lottery is a sound business investment. American Job follows a young worker, Randy Scott (Russell), as he bounces from job to job in the American Midwest. Randy's not on a career path, not seeking his life's work, not out to climb the corporate ladder. He just wants a bearable, entry-level, minimum-wage job. What Randy discovers is that no such animal exists. American Job is a fiction film that in many ways resembles a documentary. Its use of real time and real workplaces makes plain the tedium and monotony of Randy's various jobs. In Randy's first job at a plastics factory, his task is to oversee a piece of machinery which needs a button to be pushed every 45 seconds. We watch as Randy futilely tries to find something to occupy his mind during the intervening seconds; he inevitably fails and lets the hopper to run dry, causing the machine to seize up. Randy's solution? He walks out of work, only to return the next day and be sent to the boss, who fires him according to some scenario that could only be learned from some corporate management manual. Randy goes from the plastics factory to a fast-food chicken restaurant (where he lasts three days), then on to a third-shift job as an inventory worker in a basement full of boxes and asbestos. Next he tries cleaning motel rooms, then on to telemarketing. We watch as Randy goes through the ropes of each job and interacts with his co-workers. One morning at the fast-food joint, he drives up to the place, sits sipping his coffee before the shift starts, then suddenly puts his key in the ignition and drives off. In its modest way, it's a worker's revolution, self-defeating and self-perpetuating though it is. Shot in the Midwest in 1995 for $14,000, the film uses non-professional actors. (The film screened to enthusiastic audiences at the 1996 SXSW Film Festival and just completed a roving national exhibition as part of the Fuel Tour.) In appearance, Randy Russell looks something like a cross-between R.Crumb and a Harvey Pekar character in an American Splendor comic, which only augments the film's wry humor. Director Chris Smith manages to situate the film within a mixture of tones -- it is simultaneously deadpan, stark, weird, realistic, provocative, and funny. And watching American Job sure beats the hell out of working. 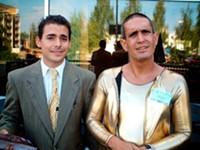 The Yes Men
The Yes Men are a couple of prankster activists whose target in this movie is the World Trade Organization. American Movie
For every big-dreaming nebbish whose pursuit of filmmaking glory lands him at the Oscars with Sarah Polley at his side, there are hundreds whose experience ...