The Wind in the Willows

Where did this come from and why haven't we heard about it? More to the point, why haven't all the children of the land been put on full alert? Far and away the best cinematic telling of Kenneth Grahame's 1908 classic, this is that rara avis, the kids film that will be loved equally by adults. I'm not suggesting that anyone over the age of 13 is going to bust a nut on this, but for kids under and adults over, this is the crème de la crème of fanciful, enchantingly surreal filmmaking. And of course, it's also the most complete reunion of the Monty Python troupe in some time, featuring four of the original six cast members (Graham Chapman is, sadly, dead, and Terry Gilliam has gone wonderfully, brilliantly mad and was, one assumes, far too busy to participate). The story of Mole (Coogan), Rat (Idle), Toad (Jones), and Badger (Williamson) and their tussles with the greedy, Thatcheresque Weasels (led by an engagingly nasty Sher) should be familiar to most of us. For those of the Richard Scarey persuasion, the tale involves the attempts of meek Mole and idealistic Rat to convince their friend (and landlord) Mr. Toad to stop wasting all his money on automobiles and other frivolities and pay more attention to the larcenous Weasels, who seek to usurp his manor -- Toad Hall -- steal his land, and bring the countryside to ruin. These days, the story plays as an anti-Tory refrain, although when Grahame first penned it (as in so much 20th-century British literature) Communism was the implied metaphorical menace. But, really, that's all beside the point of this film which seeks, first and foremost, to revel in the wild, wacky, and veddy British tradition of the absurd. To that effect, it succeeds wonderfully. Jones, as Toad, sports a greenish pallor and a garishly rotund waistline; he looks like one of those old turn-of-the-century political cartoons espousing the dangers of gluttony. Indeed, the story hinges on his voracious appetite for the newfangled motorcars (Disney's Mr. Toad's Wild Ride has nothing on this version). Epicurean Idle, the sweet Coogan, and even Williamson as Badger (I'll always think of him as Excalibur's Merlin, though) all give it their best, and the film is chock-a-block with inspired, silly tunes and antic running-about. It's also full of subtle moral lessons, but why tell the kids when they'll probably pick it up subconsciously anyway? Absolutely charming all the way through, its cheeky sense of inspired lunacy is downright contagious: I received a traffic ticket on my drive home and I blame it entirely on Mr. Toad.

Pythons, Protests, and 'Passion'
Terry Jones on 'Life of Brian' 25 years after 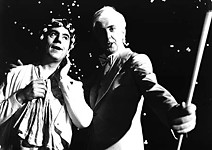 Monty Python's The Meaning of Life
One of the Python's very best films returns the group to a sketch comedy format with hilarious results. ... 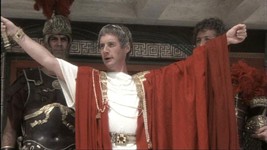 Life of Brian
Is it Christ or is it Brian? Only the Monty Python crew know for sure in this sacrilegious comedy designed to equally offend all practitioners ...