Twilight is a good title for this murder-mystery whose best attributes are not the caliber of its detective story but rather its forthright acknowledgment of mortality and aging. Writer-director Robert Benton, co-writer Richard Russo, and actor Paul Newman re-team for this private eye drama after their success in 1994 with Nobody's Fool. But unlike the unpredictability of that earlier film, Twilight's plotting is drably conventional and obvious. Still, put consummate pros like Paul Newman, Susan Sarandon, Gene Hackman, and James Garner up on the screen -- together -- and you're pretty much guaranteed to have something that's eminently watchable and enjoyable. Still, it's a shame that they're stuck in a none-too-credible story about blackmail, murder, and dangerous women in modern-day Los Angeles. Newman plays Harry Ross, a former cop turned private investigator turned alcoholic, who becomes embroiled in a long-simmering murder mystery when he agrees to help out his friends and benefactors (he lives in their garage apartment) Jack Ames (Hackman), a former screen legend, and his beautiful wife Catherine (Sarandon). Many dubious steps later, Harry is still uncovering information that should have been obvious to most anyone in the audience from the get-go. Nevertheless, watching Newman, Hackman, and Garner play men who are aware their time is growing short and who discuss their frailties and diminished capacities is refreshing film fare indeed. In many ways Twilight echoes some of the sentiments of Robert Benton's 1977 detective film The Late Show, starring Art Carney. Unfortunately, the film's younger characters are not written with anywhere near the degree of insight afforded the older characters. Twilight features some of the best young actors around -- Reese Witherspoon, Giancarlo Esposito, and Liev Schreiber -- but their actions and motivations are even more inscrutable and unbelievable than those of their elders. Though the plot elements fail to deliver in terms of suspense, the script contains many good one-liners and repartee. And with actors such as these to deliver the goods, we're inclined to overlook a lot. 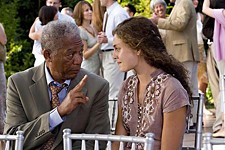