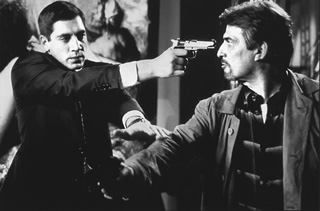 Let's squelch those troubling rumors right up front, shall we? Live Flesh (euphonious Spanish title: Carne Tremula) is a different kind of Pedro Almodóvar movie, but the 46-year-old director has not followed the dismal path of other former enfants terribles who've embraced bloodless conservatism in the name of "maturity." He still shoots the hottest and most stylish sex scenes in the business, still works with a color palette drawn from 1960s Xavier Cugat album covers, still retains a fair measure of the bracing, "nothing is true, everything is permitted" satirical perversity of early hero Luis Buñuel. What's really different about Live Flesh is that, to a greater degree than ever, Almodóvar seems fully engaged with the inner lives of his characters, regarding them as worthy of sustained exploration and even -- @en serio! -- compassion. The key players are Victor (Rabal), a handsome young misfit whose obsession with hard-eyed beauty Elena (Neri) has a lingering impact on the personal lives of two cops who, in an early scene, bust him for harassing Elena. During the arrest, one of the cops, David (Bardem), is accidentally shot and paralyzed from the waist down. Fate balances his misfortune by causing Elena to fall in love with him. Victor, meanwhile, takes the rap and goes to the slammer. After he's released, he sets up in a squalid tenement flat from which he patiently stalks (woos?) Elena to the violent chagrin of hubby David. Rabal, who for much of the film sports a crewcut rough-trade look similar to Antonio Banderas in Tie Me Up! Tie Me Down!, isn't quite the magnetic presence that Banderas was. He's a bona fide talent though, and he nails the heartsickness of a character whose only durable possession is the ride-free-for-life pass he received for being born on a Madrid city bus. The other characters in Almodóvar's ensemble are just as fascinating in their own ways. Bardem, in particular, stands out as an intelligent, passionate macho man who regards his younger rival with mingled fascination, loathing and the special terror of the prospective cuckold. Not least of Live Flesh's unexpected virtues is the insight with which Almodóvar, long noted for his preoccupation with female culture and psychology, explores the dynamics of male-male relationships. Another pleasant surprise is the attention that Almodóvar lavishes on pure storytelling. Possibly due to the story's origin as a Ruth Rendell novel, this is the most coherent, viewer-friendly narrative he's ever filmed. But again, maturity is a relative term when speaking of the man who, only a couple of movies ago, was playing rape scenes for laughs. The camp-obsessed, taboo-flouting punk of Law of Desire, Matador, and Kika may have toned down his act, but he still makes movies with a daring distinctiveness and exhilarating freshness that few can match. Whether Live Flesh proves to be a new road or just a brief detour, it's an impressive display of range from one of film's true maverick talents.