By the time James Krippendorf's overbearing mother-in-law calls him a “Neolithic twit” and orders him out of her house, our sympathies are with her 100%. The one-joke comedy of Krippendorf's Tribe wears out its welcome quickly and then coasts on the hammy talents of its esteemed acting crew to drive its one meager joke into the ground and halfway to China. Then add the dubious charms of white actors camping it up in blackface pretending to be primitive jungle tribesmen of New Guinea and you have a comedy that belongs more rightfully to cinema's Stone Age than the present. The premise is this: Anthropologist James Krippendorf (Dreyfuss) has been in a deep two-year-long funk following the unexplained death of his wife and anthropological colleague. He's supported his three kids and slumbered through the last two years on the fat of a research grant earmarked for the study of an “undiscovered” tribe he claims to have discovered with his wife. Now the time has come to present the findings of his bogus research and he opts to continue the charade. But his bluff is called by his nemesis Ruth Allen (Tomlin), the doyenne of the anthropology department, who wants him to produce film footage of his new-found tribe. Thus Krippendorf's one lie turns into a whopper as he enlists his children to dress up in native garb and fabricate primitive rituals on a crude jungle set erected in their backyard. Adding fuel to the fire is Veronica Micelli (Elfman), a young and ambitious member of the anthropology department who hooks him up with the lucrative television contract that turns Krippendorf and his tribe into cherished pop culture icons. He even manages to ply protégé Veronica with liquor one night and get her to go native in front of his camera and in his bed. Eventually, she too is in on the ruse. As scientists go, these two bring much the same credibility to the field of anthropology as Bob Newhart brought to the practice of psychology. And all their grabbing of the prominent penis sheaths make Krippendorf's Tribe a curiously awkward choice for PG-13 family entertainment. Given the silliness surrounding him, Dreyfuss is remarkably subdued; Elfman is fortunate to have a blossoming television career with Dharma and Greg to fall back on; and Lily Tomlin and the rest of the supporting actors provide little in the way of comic relief. Director Todd Holland, whose career in recent years has been associated with The Larry Sanders Show brings little of that program's ironic tone and wit to this predictable farce. Krippendorf's Tribe is one society you don't want to join. 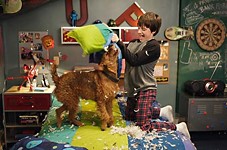 Firehouse Dog
A Hollywood pooch gets lost during a stunt and ends up a stray outside a downtown firehouse captained by a single dad with a stubborn school-skipping son.

The Wizard With Guests
...