Let's face it: In New York City, everyone is a vampire, in one way or another. So it should come as no surprise that in Fessenden's new film, one of the undead roams around the Village sucking the life out of yet another struggling, scraggly artist-type. My reaction? The world could use fewer of these boho casualties-to-be, but you can never have enough vampires. Still, Fessenden takes the obvious and twists it to his own needs, making Habit -- for better or worse -- one Nosferatu film that plays against the grain. (Habit has also been recognized with nominations in two categories at next month's Independent Spirit Awards -- best director for Fessenden and best cinematographer for Frank DeMarco.) Writer-director Fessenden plays Sam, a down-on-his-luck barkeep with a rapidly worsening drinking problem of his own and a pocketful of woe. His father has recently passed away, and his girlfriend Liza (Woodbury) has picketed for a trial separation. Things are crappy in the kind of way only the East Village can engender, and so when Sam attends a friend's Halloween party and meets a mysterious, feral beauty named Anna (Snaider), he takes the bait and they begin seeing each other romantically. The sex is terrific, but something about his new paramour bothers Sam. For one thing, she appears and disappears from his life with alarming ease. After a night on the town and some furious Battery Park lovemaking, he wakes up alone, in the harsh daylight, with a bloody lip that refuses to heal. A social disease or the mark of Countess Bathory-lite? That's the question. The real question is whether or not any of this is really happening at all. While Sam's friends cluck and fret about his degenerating physical appearance (he looks alternately like a junkie or a film student, take your pick), Sam is interested only in finding out what's up with his lover, who, for some reason, can't stand the smell of garlic and frolics with wolves in the park. Habit evokes both the Nicolas Cage vehicle Vampire's Kiss and any number of Warhol's pleasantly annoying Factory films. Like Sam, you're never quite sure what's going on, and when you are, you don't really care all that much. To his credit, Fessenden uses every available shithole in the Lower East Side as a set, evoking the ruined hell of pre-gentrified NYC neighborhoods with the help of lousy light and the thick patina of grime that is the city's hallmark. It's a dizzying, chilly viewpoint Fessenden uses, and it calls to mind the transgressive cinema of low-rent New York auteurs such as Richard Kern and Nick Zedd, but minus their sick-puppy theatrics. In the end, Fessenden's film is so accurate a portrait of The Bad Life, that you just want it to end already. It's cinema vérité stapled to a stake and run through your bleeding heart. 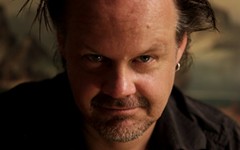 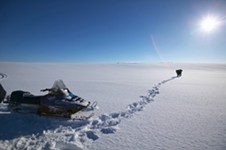 The Last Winter
It's difficult to tell whether The Last Winter is Dick Cheney's wet dream or Al Gore's nightmare, but either way you thaw it, director Fessenden ...