There's nothing like a little childhood gender confusion to blow the lid off suburbia's Teflon tranquility. Ma Vie en Rose (My Life in Pink), a Belgian import by first-time filmmaker Alain Berliner (not to be confused with the American documentary filmmaker Alan Berliner) is a warm, startling, funny, and realistic study of what happens when a 7-year-old boy is convinced, beyond all reason and outward evidence to the contrary, that he is really a girl. His certitude is astonishing in one so little, and his gender conviction is so strong that his belief can't be laughed away as the result of a “phase” or an “active imagination.” Yet the crux of Ma Vie en Rose is not a study of transgendered children per se, despite the fact that such sensational subject matter would seem to be surefire material for attention-grabbing moviemaking. We're never even quite certain about the long-term psychological ramifications of young Ludovic's (du Fresne) obsession: Is he transgendered, a transvestite, gay, or straight? Such determinations are not the movie's concern. What Ma Vie en Rose is interested in is what it means to be a “difficult” child, a child who whose difference always sets him apart, and what it means to be the parents of such a child. Ludovic's parents, Hanna (Laroque) and Pierre (Ecoffey), are amazingly tolerant of their 7-year-old's irresistible desire to dress in skirts, even though they try to reason with him to behave otherwise. But when Ludovic starts spinning elaborate and fantastic stories about how he really is a girl and how he wants to marry his playmate Jerome when he grows up, his actions begin to generate more serious adult concern. It doesn't help matters that Jerome's father is also Pierre's boss, thus after the two boys are discovered in the midst of a mock wedding ceremony, all hell starts to break loose. Ludovic and his family become the neighborhood outcasts, Ludovic is drummed out of school, and Pierre loses his job. Despite these dire and downbeat consequences, Ma Vie en Rose manages to maintain a remarkably spunky and upbeat attitude, probably in large measure because it stays focused on the child's point of view throughout. And Ludovic, himself, is never in doubt even though he watches as everyone else around him becomes unhinged. The film also has candy-colored flights of sheer fancy as we witness Ludovic's fantasies about a Barbie-like doll named Pam, who floats over the community and serves as his guiding light. The naturalism of the performances also largely contributes to the success of the movie, particularly in the case of young Georges du Fresne (the best French-speaking child actor this side of Ponette's Victoire Thivisol). Part social realism, part human comedy, part family drama, and part storybook fantasy, Ma Vie en Rose is an original, thought-provoking, and entertaining piece of work. 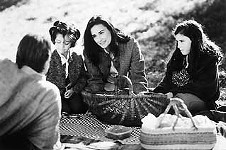 Passion of Mind
Demi Moore was probably smart to take a break from some of her recent dramatic failures (Striptease, The Juror, The Scarlet Letter) and lie low ...