The Twilight of the Golds

Originally filmed for Showtime, this adaptation of Jonathan Tolins' controversial stage play has the look and flavor of its made-for-television origins, though the subject matter remains as incendiary as ever. Specifically, if you knew in advance that your unborn male child would stand a strong chance of turning out homosexual, would you choose to have the child nevertheless? This inflammatory eugenics question is at the heart of the story here, though Marks (and writer Tolins, who adapted his play for the screen with Seth Bass) cloaks the issue in the swaddling clothes of a bitterly divided family unit. Suzanne Stein (Beals) is the mother in question; proud papa Rob is a geneticist who is pressured by his “science at all costs” boss (Schlesinger) to allow the fetus to undergo rigorous experimental testing and thus apply the geneticist's theories to a practical use. The results are perfect (“10 fingers, 10 toes”) except for the discovery that the child carries a gene predisposed toward homosexuality. Naturally, this throws everyone for a loop, not least of all Suzanne's gay brother David (Fraser) and her concerned parents Walter and Phyllis (Marshall and Dunaway), who still haven't come to terms with David's sexual bent. Should Suzanne and Rob bring a child into the world knowing what they know about the difficulties of being gay in what is generally thought of as a straight world? And what effect will their decision have on David, who knows more than anyone the rigors of growing up different? Rob, for his part, is conflicted, wanting very much to have a “normal” child, as are Suzanne's class-conscious parents, who fear what the neighbors might say. It's David, though, on whom the film relies as the moral center, and eventually it's he who shapes and informs the final opinions and actions of his sister. As David, though, Fraser pulls out the stops too far; the character is far from the mincing prototypical Hollywood homosexual of yore, but you still come away with the feeling that Fraser's earnest speechifying and flip tantrums are a charade. The same happens with Marshall and Dunaway, who play the embittered parents with such an overload of whiny Jewish guilt that you end up wanting to slap them. Only Beals seems to have any sense of reality working for her: She plays Suzanne as a competent, caring, and quiet mother who is saddled with this impossible burden and muddling through as best she can. It's Beals scaled down a notch or two, and she pulls off a great, somber job of it. Still, Marks' film has a befuddled core, torn as it is between David's story and the eugenics argument that forms the crux of the film. It's heavy-handed, dogmatic stuff, intellectually gripping and simultaneously woefully dull. Race to Witch Mountain
In this updated remake of the beloved Disney series of family movies, two siblings with supernatural powers seek refuge with a cabbie and a UFO specialist. 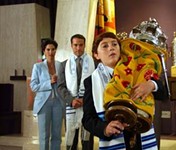