If hard work and virtue are really all we need to live our dreams, why are so many of us busting our humps as cabbies, waitresses, and freelance writers? Truth be told, merit and opportunity are doled out haphazardly, leaving deceit as many people's best hope for a piece of the good life. In this distinctive, thought-provoking film, Jacques Audiard (Confessions of a Crap Artist) suggests that society not only tolerates but actually encourages the use of sham credentials as get-ahead tools. Audiard's case in point is Albert Dehousse (Kassovitz), a draft-evading country nebbish who, during World War II, fabricates a heroic background as a French Resistance fighter. Albert's weak, eager-to-please nature makes him unusually susceptible to the idea, pushed on him by his mother, friends, and employer, that truth is less a straight-edged razor than a versatile Swiss Army Knife. Shortly after the war ends, Albert leaves his wife and, on a whim, hops a train to Paris. There, he meets a nihilistic former army parachutist called The Captain (Dupontel), who encourages him to take full advantage of a chaotic post-war situation in which “losers can seem like winners, devils like angels, and cowards like heroes.” Well schooled by the master, Albert is soon displaying an eerie genius for mimicking the outward signs of success, character, and competence, playing brilliantly off The Captain's insight that people are only too willing to see the “magic” in others, especially when they're treated as if they themselves are equally enthralling. Women, prestigious jobs, and other accouterments of success fly to Albert like metal filings to a magnet, leaving him at first thrilled at his audacity, then increasingly driven to confess his deception. Kassovitz, probably best known for directing the edgy, in-your-face Hate, shows here an ability to convey subtler emotional states: vulnerability, regret, and a sorrowful sense of emptiness at his own core. These qualities are essential to the film's success, because contrary to what its previews tend to suggest, A Self-Made Hero is not about the shenanigans of a callow, heartless scam artist. Zelig is in some ways a useful reference point, but Audiard's Cannes-winning screenplay explores the subject of provisional identity with much more depth and particularity than Woody Allen did without sacrificing the humor inherent in the situation. The framing story, told in mock-documentary style by the older Dehousse (played forcefully by the redoubtable Trintignant), is a nice touch. Letting these men give voice to our own sense of wonderment at Dehousse's incredible audacity helps us suspend our disbelief and give ourselves over to the story -- one of those necessary little self-deceptions that makes moviegoing the sublime experience it is. 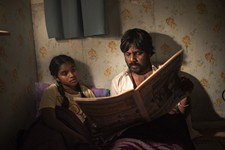