Along with It's a Mad, Mad, Mad, Mad World, John Landis' The Blues Brothers remains one of my favorite screwball comedies. Both films take the notion of chaos theory and apply it to filmmaking in ways so absurd and ludicrous that they hit a sublime high note in the comic register. There's a direct and easily traceable line to be drawn from the seminal work of Mack Sennett and Buster Keaton to Landis' original film, and this rip-snorting, charmingly silly sequel gleefully upholds that tradition. It's an orgy of finely choreographed comic free-for-alls that, with its interlaced musical numbers, recalls nothing so much as some of the early Marx Brothers' work. Co-written by Landis and Aykroyd, the film opens (after its dedication to John Belushi, Cab Calloway, and John Candy) with Elwood Blues' (Aykroyd) release from prison 18 years after the riotous events of the first film. With his brother Jake dead, no money, and nowhere to go, Elwood decides to put the Blues Brothers band back together and enters them in a bayou battle of the bands overseen by voodoo queen Erykah Badu. As far as plot schematics go, that's about all there is to it, but then half the fun, as always, is getting there. Foul-tempered nun-from-hell Mother Mary Stigmata (Freeman) points out that Elwood may have a step-brother of sorts in the Illinois State Police, Cabel Chamberlain (Morton), who is soon on Elwood's tail after $500 vanishes from the man's wallet post-Elwood. Also along for the wild ride to Louisiana are Bonifant as 10-year-old orphan Buster Blues (not as bad as you might think) and Goodman as newly recruited lead singer Mighty Mack Blues. Driving around Chi-town in a used LTD Crown Victoria surplus cop car, Elwood patiently gathers up the remains of the band (including Steve Cropper, Donald “Duck” Dunn, and Matt “Guitar” Murphy) and sets out southbound. On the way, the group once again encounters various blues legends and manages to provoke the ire of everyone including the Illinois State Police, the Russian Mafia, and a white separatist militia group (sadly, Arte Johnson is nowhere to be seen). As befits a comedy monolith based around a loose series of old Saturday Night Live skits, Blues Brothers 2000 is essentially a series of flamboyant comedy and musical set-pieces, some of which soar and some of which merely twitch, but all of which are infused with a ceaseless beat-your-head-in comic sturm und drang; if one gag doesn't do it for you, surely the next one will. The pharmacological cornucopia that fueled the manic energy of the earlier film has long since given way to middle age, but though this sequel seems vaguely restrained at times (“You don't need that, kid,” says Elwood, yanking a Marlboro out of Buster's mouth), its heart and soul and sense of unbridled fun is so on-target that it doesn't matter. 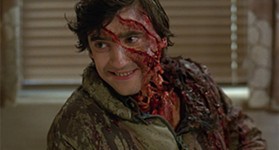 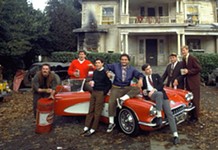