The Education of Little Tree

Boomer parents, whose selective memories belie their own youthful history of sneaking into movies like Faster Pussycat! Kill! Kill! now cry out as one for benign, traditional children's films without all the violence, sexual innuendo, and profanity they now find so troubling. Well, crank the Windstar and drag the young 'uns away from Duke Nukem 3D: The Education of Little Tree is just what you've been looking for. Based on the bestselling novel by Forrest Carter, Little Tree's story occurs in the Tennessee mountains during the early years of the Depression. Little Tree (Ashton) is a half-Cherokee orphan who's been adopted by his grandparents (Cardinal and Cromwell). The elderly couple -- he's a Scotch-Irish moonshiner and she's a full-blooded Cherokee -- teach him how to make his way in a white-dominated society without sacrificing his Native American heritage. This bi-ethnic household represents something of an ideal for cultural integration, but the story unflinchingly portrays the suspicion, misunderstanding, and outright hatred the youngster must face in the outside world. Schools give him a “white” name. Townspeople are selective at best in their social acceptance. And stories of atrocities such as the Trail of Tears, told by a Cherokee neighbor (Greene) reveal the truth that his racial identity is as much a burden as a gift. Yet Little Tree is not just an obligatory shot of white collective guilt to be endured in the name of multicultural conciliation. The interaction between Little Tree and his grandparents is hearty, humorous, and quite affecting. Both Cromwell (Babe, L.A. Confidential) and Ashton seem blessed with about 20 percent more vital force than most of us, and the delight the boy shows in learning woodland lore and the family trade (even moonshining seems wholesome in this context) is “family values” in its purest form, sans Christian Right connotations. Wrapped in a package of lush, luminous beauty courtesy of Anastos Michos' masterful cinematography, and blessed with a fine yin-yang balance of sentiment and realism, this is a solid, engaging piece of filmmaking craft by director Friedenberg, who's best known for adapting Norman Maclean's A River Runs Through It for the screen. One note of possible -- and certainly ironic -- interest: Forrest Carter was the pen name for Asa Carter, a prominent white supremacist who wrote speeches for George Wallace in the early Sixties. Some reports have it that Carter's racist views moderated over time. Others ascribe the more enlightened tone of his later work to financial expediency or the odd affection even the most intractable bigots sometimes reserve for Injuns. (Perhaps they make exceptions for minorities that run cheap casinos and refrain from making gangsta rap music.) In any event, it seems only fair to grant Carter the same courtesy we have other politically extreme artists (John Milius and Ezra Pound, to name two random examples) and judge his work by its laudable overt content, not his unsavory personal ideology. 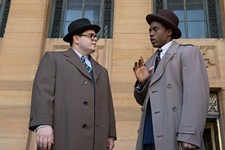 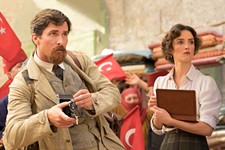