In the course of life, horrible, tragic events sometimes occur. We all know this to be a fact of life, yet this knowledge doesn't make our acceptance of the truth any easier to bear. Human beings seek reasons and culprits and causes in order to make sense of our tragedies and restore reason to those who have entered the land of the unthinkable. Few people understand this better than attorney Mitchell Stephens (impeccably played by Ian Holm), who arrives in a small rural community in British Columbia that has just experienced a gut-wrenching disaster in which 14 children perish and many others become injured when their schoolbus inexplicably crashes into a frozen lake. Promising compensation and retribution to the grief-stricken parents if they allow him to represent them in a class-action suit, one might easily mistake Stephens for little more than a well-oiled opportunist, yet he understands their agony all too well. He struggles to make his peace with another kind of bereavement, a living death, in which his daughter has been lost to drug addiction. The Sweet Hereafter fashions a rich, haunting tale from this anguish, a tale whose exquisite illumination transcends the mournful details of its storyline. Adapted by Canadian filmmaker Atom Egoyan from the acclaimed novel by Russell Banks, the film represents a career breakthrough for the director. Up until now, Egoyan has enjoyed a reputation as a top-flight arthouse writer-director whose singularity of vision in such films as Exotica, Speaking Parts, and The Adjuster has also fostered a sense of his works as being somewhat remote and hermetic. With The Sweet Hereafter, Egoyan, for the first time, adapts someone else's source material and even though he brings much to the story that is clearly his own (which results in a decidedly “Egoyan film”), it's still a story that manages to touch a more universal nerve. As Mitchell Stephens goes from home to home, we, along with him, gradually piece together a patchwork of understanding from the details of ordinary lives. Egoyan layers the story of the Pied Piper into the film, a resonant analogy that was not in the book. He also discovers beautifully cinematic storytelling devices such as the way the story of the disaster is told by means of a fractured temporal structure and also the brilliantly unsettling carwash sequence that opens the movie. The performances are all subtle jewels as well; each actor carves out a fresh and unique character. I can think of no other movie that has dared to analyze grief and its aftermath with such naked honesty and precision, a film whose here and now so totally rebukes the notion of a sweet hereafter. With a clarity of purpose and vision, Egoyan casts his line as though he were an ice fisherman determined to plumb the unyielding surface fissures to find some life that bites back from the underside of the cold, impenetrable Canadian frost. 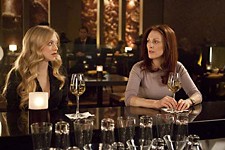 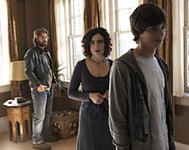