An American Werewolf in Paris

In horror terms, 16 years is a dang nigh unprecedented span between an original movie and a sequel. There must have been--what? -- seven or eight Friday the 13th sequels in less than half that time. But John Landis' hip, gruesomely inventive American Werewolf in London made a pretty vivid impression on early-Eighties horror fans bored half-crazy by some of the tiredest hack & hurl garbage ever produced by the genre. British director Anthony Waller (Mute Witness), who was only 12 when the AWIL movie came out, obviously appreciated and internalized the unique elements that have kept Landis' semi-classic of lycanthropic lore alive in the hearts of its fans. Almost inevitably, his sequel falls a blood-flecked whisker or three short of the model in terms of originality, but this is still a fast-paced, entertaining homage that recaptures a fair amount of the old lunatic energy and subversive humor. Writers Tim Burns and Tom Stern, who were responsible for 1994's uneven but endearingly weird Freaked, have moved the action to Paris, using its gloomy medieval cathedrals, catacombs, and underground passageways to nifty atmospheric effect. Scott, in a role similar to that played by David Naughton in the original, is a young American adventurer who, while bungee-diving off the Eiffel Tower on a dare, rescues a suicidal French beauty (Delpy) who's trying the same leap sans rubber lifeline. Lovestruck but puzzled by her standoffishness, he soon finds out why she's so stubbornly resisting his wholesome charms: When she speaks of her “cycle,” she's referring to biological processes far more exotic than the one that euphemism generally refers to. Sure, he'd heard about these French chicks' aversion to shaving body hair, but jeez… Soon enough, our man is learning just how profoundly love can change a guy and is helping his mercurial jeune fille battle a murderous pack of disco-crawling werewolves bent on exterminating the city's entire human population -- American tourists first. If you saw the original American Werewolf, you won't find any real surprises here. The jokes are a bit farther down the browline -- or maybe the smartness of the Scream movies has simply upped the ante in this department. And even by horror movie standards the characters seem incredibly clueless in the face of obvious danger. These failings aside, though, there's still plenty of gore-slinging, wisecracking fun to be had, and yes, the repulsively convincing werewolf transformations and attacks still pack a breath-stopping wallop. (Oddly, though, the addition of digital effects adds very little to Rick Baker's Oscar-winning makeup work in the original.) So, if you loved the first Werewolf film, enjoy the new movie-fan pastime of critiquing digital animation, want to see Julie Delpy's breasts -- or all of the above -- consider checking out An American Werewolf in Paris. 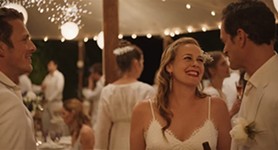