As Good as it Gets

The title, As Good as It Gets, looms like an omen, telegraphing, correctly as it turns out, the impression that this movie would've, could've, should've been better. Make no mistake, As Good as It Gets' winning combo of big laughs and big emotions practically ensures that it will be crowned the feel-good hit of the holiday season. And not undeservedly … there's a lot to like here, primarily the performance of Jack Nicholson, whose work in this film is the finest he's done in years. Yet in between all the laughs and tears, it becomes painfully obvious that there's not a whole lot of story here to prop up the constant emotional yanking. The movie plays best as a series of scenes -- some of them very good -- that fail to coalesce into a solid storyline. Character motivation is for the most part absent, and, occasionally, shot coherence is so sketchy as to become mildly confusing and engender the awareness of something missing. That a cute dog and a sick kid are the two biggest devices for advancing the plot also gives a fair indication of this movie's over-dependence on formula. Producer, director, and co-screenwriter James L. Brooks usually has a better grip on how to temper all these wild swings of emotion, having been involved in creating such innovative television shows as Taxi, The Mary Tyler Moore Show, The Tracey Ullman Show, and The Simpsons, and directing Broadcast News and the multiple Oscar-winner Terms of Endearment. But As Good as It Gets lurches to and fro in a way that won't impede its quips and zingers but will confound anyone looking for the dramatic arc. The vicious one-liners that spew relentlessly from the mouth of Melvin Udall (Nicholson) may be the real glue that holds these scenes together. Melvin is a successful author completing his 62nd romance novel who also suffers from obsessive-compulsive disorder. He lives alone in a New York City apartment, and has a pathological fear of germs and stepping on sidewalk cracks. He also unloads venomous verbal shots at anyone who comes within his radar. He is an equal opportunity insulter -- his remarks can be homophobic, racist, misogynistic, xenophobic… whatever the occasion requires. Exactly how and why such abusiveness should be a symptom of OCD is extremely murky (as is the narrative consistency of his many other symptoms), but the movie's task is to lead Melvin into becoming a better man. Despite himself, he befriends the dog of a neighbor -- a gay artist (Kinnear) who is senselessly beaten by intruders -- and gradually befriends the neighbor. He also manages to develop a shaky rapport with the only waitress (Hunt) who will serve him at the restaurant where he eats daily. Kinnear is steadily proving that he may yet have the soul of a decent actor, but the fabulous Helen Hunt is woefully ordinary here. One wonders if Brooks went through his Rolodex, and when his Broadcast News gal Holly Hunter wasn't available, just moved on to the next name in queue. There's also the unmentionable Hollywood folderol about men successfully romancing women several decades their junior. Not only does this waitress bestow her gratuities on this man old enough to be her father, but he's a guy who also comes with a whole laundry list of pathologies and bile. In fact, it may be this bile that makes As Good as It Gets so darn irresistible. Melvin, because he's not well and also has an amusing way with a phrase, can utter the unspeakable. He's not speaking for us, of course; it's his illness talking. And laughter, as we all know, is the best medicine. 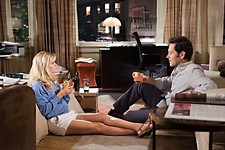