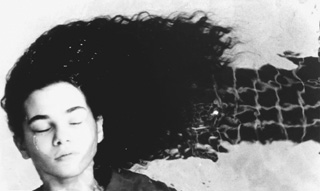 Gorgeously shot and featuring two vastly appealing main characters, Denis' tale of sibling revelry nevertheless prompts the question, “Who cares?” It's not from lack of form: Denis (and cinematographer Agnes Godard) construct the film from countless haunting images, be they the legs of a sexy baker's wife (belonging to Bruni-Tedeschi, recently of Mon Homme) or the successive parade of streetwise youths that ambles throughout the film's background. Depite all these arresting images and the evocative soundtrack by the Tindersticks, Nénett and Boni is as thematically empty as an abandoned holiday wrapping, lovely to look at but cloaking nothing. Houri and Colin play Nénette and Boni, siblings who were separated sometime in the past and arrive back into each other's lives when the 15-year-old Nénette skips out of her boarding school after becoming pregnant. Her brother has taken over their dead mother's tiny, cramped flat, and is alternately using it as a crash pad for an endless stream of lowlife buddies and as a warehouse to store stolen coffee pots and the like. Every kid's dream, really, but the pair's much-despised father soon shows up in the wake of Nénette's lengthy absence from school, and it's not long before Boni is trying to pick him off from the rooftop with a .22, sniper-style. Obviously, there's no love lost there, but Denis fails to fully inform us why these otherwise ordinary kids so hate their father. Whether child abuse or sustained halitosis, we're left to guess. Into this unfortunately laconic situation, Denis drops several other characters of note, notably Bruni-Tedeschi as the ample-figured wife of the baker next door (whom Boni fantasized about to frequent comic effect) and the baker himself, a transplanted American who whips up the most mouth-watering pastries this side of Like Water for Chocolate but still hasn't mastered the fine French art of the croissant. Denis keeps her main story -- that of Nénette's unplanned pregnancy and where it's heading -- moving gamely along with all the gripping resonance of a dead snail. Honestly, if it weren't for Denis' striking visual sense, the producers could make a small fortune marketing Nénette and Boni as a sleep aid. Granted, Colin and Houri are both delightful actors. The bond they create between these onscreen siblings is terrifically realized and fully developed, but it's far too little to sustain a film in which virtually nothing happens, despite the fact that it all looks so very good. 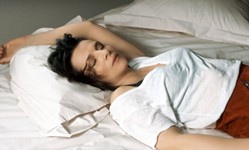