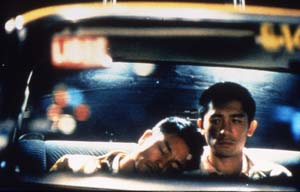 As well as anyone making movies today, Wong Kar-Wai appreciates the ironic curse of youth: At the age when we look our best, have the most freedom, and bear no burden heavier than tweaking the vocabulary and imagery of pop culture, we often seem paralyzed by all that glorious, unlimited opportunity. Happy Together is the latest and best in the 39-year-old Hong Kong director's occasional series of films about love-obsessed young folks adrift in haunting urban dreamscapes that reflect both the alienation in their hearts and the overheated yearning of their imaginations. This time around, Wong's story focuses on a pair of gay lovers named Lai Yiu-Fai (Leung) and Ho Po-Wing (Cheung), who've moved from Hong Kong to Buenos Aires to make a fresh start on their hot but fractious relationship. Lai, the narrator, is superficially the more stable of the two, agonizing constantly over Ho's chronic cheating and irresponsibility. But as we soon see, Lai is merely playing an arbitrary role in an ongoing two-man melodrama. Smacking his steel against Ho's flint creates the hot, transitory sparks that both men -- despite all their saccharine protestations of love -- obviously see as the major rationale for their relationship. The deeper and darker the lows, the more intense the highs seem by contrast. Wong has explored this kind of perverse, ritualistic behavior before in Days of Being Wild (1991), Chungking Express (1996) and to some extent, Fallen Angels (1995). In Days, Leslie Cheung pined endlessly for his long-lost mom. In Chungking, Takeshi Kaneshiro based his timetable for finding love on the expiration dates stamped on pineapple cans. For Lai and Ho, the image of deliverance is an Argentine waterfall with the legendary power to wash away cares and pain. This stupendous waterfall is a recurring image, one that blends with intoxicatingly gorgeous scenes of night streets, color-flooded interiors, and near-abstract compositions of light and motion to inundate the viewer with dazzling visual stimuli. Predictably, Wong and longtime director of photography Christopher Doyle are often accused of stressing style over substance, a charge supported by Wong's typically skeletal plots. As a wholehearted convert to Wong's art, though, I'd argue that creation of a style this revolutionary is both substantial and meaningful. Furthermore, thanks largely to the raw bravery and intensity of the two leads' performances, Happy Together takes a quantum leap forward in terms of visceral power. Despite the unearthly beauty of this film's world, I suspect you'll feel it merging with your own reality, investing your emotions with richer significance and, perhaps, making old memories and yearnings burn with fresh intensity. Even if you don't ultimately agree with my belief that Wong Kar-Wai is one of the most important directors of the Nineties, you'll see things that will haunt your thoughts and dreams for a long time to come. Happy Together, and Fallen Angels
New on DVD