A punchy, clever film noir from Australian director Bennett, Kiss or Kill spins a new twist on the age-old cliché of grifter lovers on the lam. Nikki (O'Connor) and Al (Day) run a convenient scam on lonely businessmen, with the curvaceous Nikki insinuating herself into their hotel rooms, knocking them out with the old sedative-in-the-champagne trick, and then taking them for all they're worth. One night something goes wrong, and the couple are left with a corpse and a briefcase in which they discover a videotape starring local football hero Zipper Doyle (Langrishe) and an underclothed adolescent boy. The couple flee with the tape in hand, though due to a few missteps (such as Nikki calling up Doyle to give him her opinion on his sordid hobbies) both Zipper and the local constabulary are on their tail, sending the pair deeper into the Australian bushlands. Frantically trying to elude the homicidal Zipper (who has absolutely no qualms about settling the score via his .38), they shack up at a series of progressively dingier motels and fly-by-nights, where Nikki's perilous mental facade begins to crumble, placing both of them in dire jeopardy. Day and O'Connor are enormously likable as the lovestruck psychos. O'Connor's ditzy Nikki is alternately frightening in her psychoses (flashbacks reveal her mother's violent death before her young eyes) and oddly charming; it's no wonder she's such an accomplished scam artist. Day plays Al relatively straight, acting as the conscience and moral center (what there is of it) of the pair. The remarkable thing about Kiss or Kill -- and the reason that such a cliché-ridden set-up seems so fresh -- is Bennett and cinematographer Malcolm McCulloch's breathlessly nontraditional pacing and editing techniques. Staccato jump-cuts abound, and Bennett uses flurries of hand-held camerawork to draw the viewer into the immediacy of Al and Nikki's rough-and-tumble world. Much of the film was improvised, and in that sense it calls to mind nothing so much as Jean-Luc Godard's early masterpiece Breathless, itself a nouvelle-noir touchstone. With an eclectic supporting cast of oddball characters and fewer stereotypes than you might expect (Possum Harry, an aboriginal tracker called in by the detectives late in the film, is a nice touch), Kiss or Kill manages to rise above the wash of noir clichés that surround it. Proof positive that even though Robert Mitchum may no longer be with us, film noir continues onward, upward, into the dark. 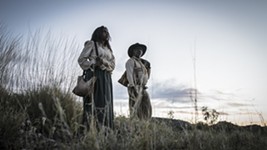