Almodovar lite. Spanish filmmaker Pereira's throwaway romantic farce is set in modern-day Madrid where, as the film opens, struggling young actor Victor Ventura (Bardem) is packing his bags on his way down and out of town. Longing for recognition, he has instead endured 15 months of soul-crushing nada before his agent, Angela (Barranco) rushes in with news of a new American production in search of a Spanish male lead. Intrigued, Victor decides to stick around, taking a job as a phone-sex operator to make ends meet while waiting on fame. Here he converses with Bill (Flotats), a lonely, closeted plastic surgeon, and the mysterious Amanda (Sanchez-Gijon), a sex-starved beauty whom he agrees to meet in person. That meeting leads to a screwball double-cross and romantic triangle that nobody, but nobody, sees coming. It's high farce lowballed, and though Mouth to Mouth's winning script by Joaquin Oristrell makes the most of its madcap lovers' hi-jinks, it's still a pale imitation of the wildly perverse fields usually tilled by the more subversive (and funnier) Almodovar. All the elements seem to be in place: Bardem's Victor is a mediocre actor who blossoms behind a telephone receiver, drawing out his long-distance clients with purrbox soliloquies worthy of some AT&T Casanova. Once away from the phones, though, he has a difficult time keeping the fires stoked, relying instead on verbal psyche-ups featuring his less-than-perfect rendition of De Niro's Travis Bickle (and really, isn't it high time everybody got a new favorite character to mimic?). Bardem brings just the right amount of puling, puppy-dog shyness to his role, too: He looks like Nicolas Cage on a depresso-bender after going a few rounds with Stallone. Ouch. Sanchez-Gijon is likewise excellent. Her scheming, ultra-sexy Amanda is a multi-layered temptress, the madonna/whore complex brought to vivid life. Why then does Mouth to Mouth leave you feeling like you just caught a bad case of Hugh Grant's lessers? Pereira's direction is flaccid and underwhelming. Try as he might (and he does try, flooding the screen with various neons and primaries, which only ends up drawing attention to the Almodovar connection, or lack thereof), he can't seem to balance his storyline with his thematics, which as near as I can tell has something to do with the lengths to which people will go to achieve fame. It winds up a gorgeous, muddled mess, more memorable for its hideous electronic score than anything else. 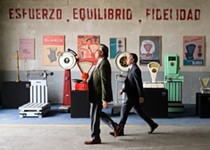