Chronicle of a Disappearance

This experimental meditation on the psychological effect of political instability on the Palestinian people is the fascinating first feature film of Palestinian filmmaker Elia Suleiman. His movie presents a series of tableaux, seemingly unconnected images and incidents that give the impression that they are searching for a unifying narrative thread. Despite their idiopathic expressiveness, no conventional storyline emerges. But together they create a compelling portrait of marginalization and inaction. Some images: The proprietor of the Holyland souvenir shop uses water from the tap to fill little bottles of holy water. An aunt gossips on and on about family matters. Three men fishing on a motor boat praise Allah and trash-talk everyone they know back on land. A Palestinian actress futilely searches for an apartment to rent in Israeli West Jerusalem. Playing himself, Suleiman tries to address an audience about the content of his upcoming film but is stymied by the technological failure of the PA system. Suleiman's parents fall asleep to the TV station sign-off and the eerie television glow of the Israeli flag waving on the screen while the national anthem fills the darkened room. Men sit quietly outside the souvenir shop, watching intently as nothing occurs. In long shot, men leap from a car and nearly come to blows. In scene after scene, such as these described, the beginnings of stories almost occur. Yet the elements never seem to find their narrative next step. Instead, they accumulate and become the hues of the filmmaker's palette, hues that Suleiman uses to create a subjective summary of the unsettled quality of life in his homeland. The use of non-professional actors helps Suleiman sustain the documentary-like flavor of his tableaux; using himself and other family members as actors underscores the movie's personal relevance and motivation. In addition to playing at such prestige festivals as Sundance and the Museum of Modern Art's New Director/New Films series, Chronicle of a Disappearance received a prize for best first feature film at the 1996 Venice Film Festival. It's easy to see why. 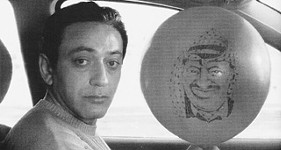 Divine Intervention
It’s immensely inviting to dollop as much praise as possible onto Suleiman’s abruptly humorous comedy of manners about the Israeli-Palestinian situation. After all, what could ...