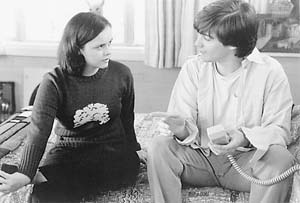 The emotional deep freeze experienced by a group of characters in New Canaan, Connecticut over the 1973 Thanksgiving holiday weekend is the subject of The Ice Storm. The aptly named film, adapted by producer-turned-screenwriter James Schamus from the novel by Rick Moody, gets so many of the outward trappings and small period details so wondrously right that the sheer accumulation of “correct touches” threatens to obscure the thinness of the story and the off-putting empathetic void which these characters inhabit. The WASPy sterility of their upper-middle-class lives is, in part, what the movie posits as the problem, but in so doing The Ice Storm never much allows the audience to warm up to its characters. The absence of heat is this drama's fatal flaw. The performances are terrific, nevertheless, as the movie goes about the task of paralleling the stunted emotional lives of the adults and children of two neighboring families while Watergate, wife-swapping, and drug experimentation dominate their social arena 10 years following the demise of Camelot. Trodding through this familiar Updike/Cheever suburban turf is Kevin Klein as family man Ben Hood, who is having an unsatisfactory adulterous affair with his neighbor Janey Carver (Weaver). Janey's husband Jim (Sheridan) is frequently away on business but Ben's wife Elena (Allen) has grown increasingly suspicious. Ben and Elena's daughter Wendy (Ricci) is sexually experimenting with both the Carver boys (Wood and Hann-Byrd), while her brother Paul (Maguire) is enamored with a rich girl from his prep school. All these micro-dramas coalesce and come to a head during the course of one long evening that also plays host to the area's worst ice storm in 30 years. Sometimes, as in the case of the ice storm, the movie's intentions are overly literal and obvious; yet most of the time we are left to infer meaning from slight triggers and cues. This is because, by and large, these are characters who are too genteel and over-pedigreed to say (or always even know) exactly what they mean. For example, Ben's way of discussing the facts of life with Paul is to advise him not to masturbate in the shower because it wastes water and electricity. Or when Janey catches Wendy playing “show me yours, I'll show you mine” with her youngest son, her alarmed impulse is to lecture Wendy about Margaret Mead and the Samoans. By following his award-winning Sense and Sensibility (which was produced and co-written by longtime collaborator James Schamus) with this American period piece, director Ang Lee (Eat Drink Man Woman) is fast proving himself a cultural chameleon. But with The Ice Storm, Lee seems to have emphasized the details of cultural accuracy over the rudiments of telling a gripping drama. 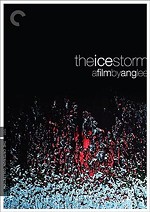