The Man Who Knew Too Little

Whither Bill Murray's career? The pockmarked comedian's last substantial role was in Groundhog Day some four years ago (Mad Dog and Glory, made that same year, doesn't count seeing as absolutely nobody remembers it). Since then he's been virtually off the map. Murray has always struck me as an acquired taste -- while other early Saturday Night Live cast members such as Dan Aykroyd and Jane Curtain have mastered the art of mediocre films and episodic television, Murray has stuck to his creative guns, more or less, which has caused his career to sputter. This new comedy from the director of Sommersby is hardly up to the actor's usual wry, smarmy wit; it's all broad slapstick and double-entendre triple takes, more Dudley Moore than Bill Murray. Here he plays a bumbling naïf, Wallace Ritchie, who arrives unannounced in London on his birthday to pay a call on his banker brother James (Gallagher). Much to his chagrin, James is hosting an important dinner party that night, and instead hustles Wallace off to enjoy the nightlife in the form of the “Theatre of Life,” a bizarre, audience-participation guerrilla theatre group not unlike that seen in the recent Michael Douglas thriller The Game. Wallace, however, answers the wrong phone call at the wrong time and instead unknowingly becomes involved in a convoluted plot to blow up UN representatives at a banquet. As Wallace stumbles blithely along with gun in hand (he thinks it's fake) and the body count rises (he thinks they're actors), both Russian and British assassins and spies track his every move in the mistaken belief that he's some sort of American super-agent. Along the way, he manages to connect romantically with a leggy spy (Whalley) and dodge enough firepower to bring down 007. Both Amiel and Murray have broken down the gates of the ham factory here: The Man Who Knew Too Little is less a standard comedy than it is a classic British farce, and Murray is acting with all the stops out, mugging shamelessly, and using those wicked eyebrows and monstrous widow's peak to fine effect. Unfortunately, the film's overall silliness drags it down. There are only so many variations on the mistaken identity theme than you can pull out of material like this, and Amiel, it seems, is not the person for the job. Granted, when Murray's firing on all cylinders, he's unlike any other comic working today. Here, he's Cary Grant's dumber brother by way of Hitchcock (the film's title is a direct Hitchcock allusion), the Wrong Man who muddles through nonetheless. It's not Murray's best work by a long shot; it's far too broad for his seamlessly unctuous, wheedling comedy, but it is a painless enough way to kill 90 minutes or so, if that's what you're aiming for. 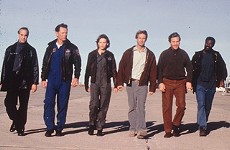