One reason Henry James is such a hot movie property these days is the relevance of one of his dominant themes -- money's ability to mock and compromise our dearest ideals and illusions -- to our era of soulless rock & roll capitalism. Washington Square is one of the most “modern” works in the Jamesian oeuvre, owing to its dark comic shadings and the scabrous cynicism lurking beneath the author's elegant prose. Like many of his works (Daisy Miller, The Wings of the Dove) its protagonist is a young woman facing a conflict between the sophisticated, power-driven world around her and the simple truth and goodness her heart desires. Catherine Sloper (Leigh) is a rich but homely heiress being courted by a sweet, floridly earnest hunk named Morris Townsend (Chaplin). The gawky Catherine is practically floating in his pheromonal wake, but not her father (Finney), who regards the penniless smoothie as a no-account gigolo. Catherine's Aunt Lavinia (Smith) is the go-between among all three. Though nominally on her niece's side, wily Lavinia also seems to be pursuing her own personal agenda. As with so many of these revered 19th-century mahst'pieces, the story's particulars are straightforward soap opera. Their enduring power is supplied by the rich subtlety of the omniscient author's commentary. Director Holland (Olivier Olivier, The Secret Garden) is a fine writer herself, and she goes to great lengths to assure that James' worldly sensibility and brilliant dialogue are preserved. Chaplin and the redoubtable Smith are especially delicious in their face-to-face exchanges. A clever pair whose fortunes are contingent upon others, they recognize this quality in each other, yet acknowledge it only in the most slyly oblique manner. Finney is likewise terrific as Dr. Austin Sloper, a despicable man who nevertheless has a troubling charm and magnetism -- troubling because these qualities proceed from his ease with life's harsh, Darwinistic nature. But Catherine, the only innocent of the lot, is the key character here. For this movie to work, Leigh has to nail down each step in the naïf's progress toward full emotional autonomy. Unfortunately, as she's wont to do, Leigh uses a 30-pound sledge to drive those nails, especially in the early scenes when she turns Catherine into a blinking, twitching, pratfalling spaz, not the pained introvert James had in mind. The critical piling-on of Leigh (who's now getting hammered for the very same traits that once drew delirious praise) may seem unfair, yet Washington Square is a perfect example of the drawbacks inherent in her approach. When a key character's artlessness and lack of self-awareness are defining traits, it's hard to imagine a casting decision more disastrous than having her played by someone as helplessly and compulsively self-conscious as Jennifer Jason Leigh. 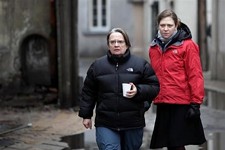 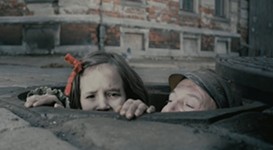 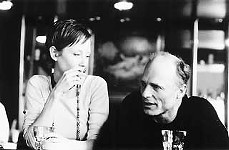