It's easy to imagine the pitch meeting for Mad City: Oh, it's a cross between Dog Day Afternoon and Network. The only thing the pitchers forgot to mention was that Mad City lacked the passionate action of the former and the satiric edge of the latter, leaving their film a rote and non-too-penetrating morality tale about the crass underbelly of the TV news biz. As delivered by the politically inclined international filmmaker Costa-Gavras (Z, The Music Box), Mad City's oversimplification of the ethical issues is bound to annoy those with any first-hand knowledge of the news dissemination process and disappoint others who've come for the promise of a city whipped into a “mad as hell” frenzy. Travolta plays the confused, laid-off museum security guard Sam Baily, who wants nothing more than reinstatement in his old minimum-wage job. Much like his spiritual namesake George Bailey in It's a Wonderful Life, Sam is this story's Everyman, the centerpiece without whom all the other characters' lives would be different. He's a dim but likable working stiff with a gun, the most baffled schlub caught in a crisis that escalates beyond his control since John Cazale's ill-equipped bank robber in Dog Day Afternoon. Hoffman plays news shark Max Brackett, a network reporter banished to the sticks for a national on-air indiscretion, who chances onto Sam's drama while covering a fluff story about the museum's financial downturn. Max correctly recognizes the story's potential to launch him back up the career ladder, especially if sweetened and manipulated by his savvy storytelling and image-shaping techniques. He goes about molding the clueless Sam into a “poster boy for the disenfranchised,” all the while serving his own best interests instead of Sam's. Mad City is populated with a supporting cast of stock characters: Alan Alda's vainly omnipotent network news anchor, Robert Prosky's crusty local news editor, Blythe Danner's patrician museum executive, Mia Kirshner's wide-eyed intern, and so on. The fact that the museum is host to a group of schoolchildren when Sam inadvertently takes the place hostage adds ready-made emotionality to the story and provides Travolta with the opportunity to cavort charmingly with kids for a couple of scenes. For their part, Travolta and Hoffman both turn in solid work and watching these actors go through this strange pas de deux is the only aspect of the film that remains engaging. Mad City is destined to remain a blip on the map. 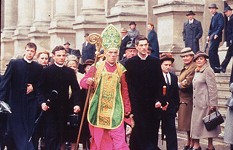 Amen.
Firebrand filmmaker Costa-Gavras (Missing) turns his lens upon the Holocaust, examining the conditions that allowed the mass exterminations of Jews to continue in virtually full ...

This 2012 film finds the now 80-year-old Costa-Gavras (Z, Missing) as cinematically accomplished as ever. A taut, fast-moving financial thriller, the film begins with the ...