Which of our traits are socially ingrained and which are genetically imbued? And what about morality, that most personal of all characteristics? How is it acquired, adapted, shed, and reconfigured? The Belgian film La Promesse, by the brothers Dardenne, presents an opportunity to observe these issues up-close while presenting the story of 15-year-old Igor (Renier), a boy facing an unexpected moral quandary. He's caught between obedience to his single-parent father Roger (Gourmet) and a nagging inkling that what his father is asking him to do is morally suspect. His father's law is the only rule he knows, yet an unforeseeable accident sets in motion a whole series of events that causes Igor to question his father's absolute authority. Roger's livelihood comes from trafficking in illegal aliens, whom he provides with doctored papers, subsistence shelter, and off-the-books employment in exchange for hefty cash fees and other forms of human barter. Roger is training Igor to follow in his footsteps, an apprenticeship that involves forgery, deception, and petty thievery, and is predicated on the exploitation of foreigners and other strangers. At 15, Igor is stumbling through the vague twilight years between childhood and adulthood. He works daily for his father instead of attending school, but most of all wishes to spend time working on his go-kart and playing with other boys his age. And although Roger's tyranny of the boy borders on the abusive, it is also clear that feels sympathy and tenderness for his son. Then one day during a police raid, one of the illegal workers falls to his death and Igor finds himself torn between his instinct to report the accident to the police and his father's insistence on hiding the evidence. The dilemma is complicated by the growing compassion Igor discovers for the worker's wife Assita (Assita Ouedraogo) and her young baby. Assita is a self-assured immigrant from Burkina Faso, someone whose otherness is starkly apparent to Igor. But as he comes to witness the emotional brutality of the situation in which she finds herself, Igor comes to realize that father may not always know best. The film's staging of the final father-son confrontation puts a successfully memorable spin on an age-old dramatic conflict. The film's tightly framed and often hand-held camerawork keeps the story's focus on Igor's point of view. La Promesse is a penetrating coming-of-age story, one that argues that adulthood begins with the emergence of moral convictions. 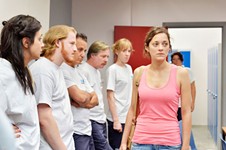 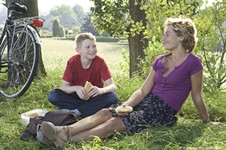