Late morning hush. Sweet waking dreams. Traffic lights presiding silently over empty streets, and a day's respite from the oppressive gravity of purpose. For most of us, Sunday is the essence of freedom. But for Oliver (Suchet) and the rest of the guys at his dingy homeless shelter in Queens, it's just another meaningless 12-hour slog between waking and the 8 o'clock lock-in. “The days engulf me,” admits paunchy, middle-aged Oliver, a once prosperous IBM salaryman reduced to living on the streets. “It's as if every day is Sunday.” But everything changes one morning when he meets Madeleine (Harrow), a married English actress whose career has free-fallen from the Royal Shakespeare Company to bit parts in bad horror movies. She mistakes Oliver for a famous movie director named Martin Delacorta and he, emboldened by her quirky but undeniable sexual allure, plays along, eventually following her home and having sex with her on the floor of her apartment. So begins one of the oddest, most affecting movie love stories of the year. In this suprising 1997 Sundance grand jury prize winner, director Jonathan Nossiter conjures improbable magic from the seemingly incompatible elements of documentary realism, earnest social protest, relentless symbol-mongering and, most importantly, a breathtaking tenderness toward his characters that reminds us how absent that vital quality is from most popular art. Over the course of one day, Oliver and Madeleine bare their respective souls through a strange game in which they pretend Oliver really is Delacorta, and that he's living at the shelter to research a movie. This lie, which we're never sure the somewhat unbalanced Madeleine fully acknowledges as such, provides a way for both to make the most painful confessions while retaining a certain protective distance from their reality. Adding to the uneasy power of the narrative are a vague sense of looming danger (in part from Madeleine's neurotically frazzled husband) and puzzling bits of information that repeatedly change the way we perceive both of the lovers. Willful artiness rears its head at fairly regular intervals. Why does Nossiter have the weather change in almost every scene -- snowing one minute, then sunny, then overcast again? What's the symbolic import of all those mangy potted plants Madeleine is collecting? Could it even be that Oliver actually is some kind of artist? In the end, none of those annoyances and unanswered questions really matter. The performances by Suchet (previously best known as Agatha Christie's Hercule Poirot in the PBS teleplays) and Harrow (The Last Days of Chez Nous) are so brave and so naked and the compassionate, inquiring humanity of the script so fully involving that most viewers will reach out to match Nossiter's faith with their own. Virtues like these should carry Nossiter far beyond the end of his infatuation with stylistic contrivance. 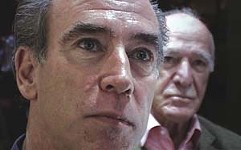 Mondovino
Sprawling documentary about the globalization of the wine industry is ambitious but frequently directionless – for true connoisseurs only.