The Myth of Fingerprints

A family reunites for the Thanksgiving holiday: Instead of turkey, The Myth of Fingerprints serves up family dysfunction under glass. First-time feature film director Bart Freundlich presents a finely distilled portrait of dysfunction as a group organism, a symbiotic pathology that infects the whole structure. Freundlich's movie shows us aspects and consequences of this disease, but it never pries or picks at the scabs of damage long done. In many ways, these are Ordinary People, not unlike the ones brought to life years ago by Robert Redford and Judith Guest, families that become undone by everything that is left unsaid and unexamined. Here, too, the family has to contend with that chilly Northeastern reserve. The Myth of Fingerprints is set in Maine. Three grown children return to the family homestead for the holiday and join their kid sister (Holloman) who still lives at home. Two of them are also accompanied by significant others -- outsiders to the family dynamic. The family is presided over by aloof dad Hal (Scheider) and warm mom Lena (Danner). Although he loves his children, Hal is clearly pained by their invasion into his household. It seems more the result of a deep-seated misanthropic streak than any genuine dislike of his children. He is unable to express feelings and it appears that long ago he and Lena settled into a mutually satisfactory pattern of co-dependence. Son Jake (Vartain) arrives with his bubbly, outspoken companion Margaret (Davis), who provides a real contrast to this clan's reserve. Jake is perplexed because he is unable to admit his love for Margaret and worries that a child can never truly escape the family knot. Mia (Moore) is the more outspoken sibling, quick to anger and find fault, especially with pleasantly accommodating companion Elliot (Kerwin). Over the weekend (in a poorly developed storyline), Mia meets up with an admirer from childhood who has changed his name to Cezanne (LeGros). Most overtly troubled is Warren (Wyle) who hasn't been home for three years, ever since the breakup with his hometown girlfriend Daphne (Bareikis). As things turn out, Daphne is also home for the weekend and as the old lovers inevitably reunite, skeletons come pouring out and further pieces of the family pathology fall into place. But The Myth of Fingerprints is no jigsaw puzzle. Sometimes you can only surmise which pieces might interlock and moreover, not all the pieces are available to view. That's both the elegance and the frustration of this movie. There's a simple, well-honed understatement to the proceedings (which is played beautifully by the ensemble) but there's also a paucity of solid information on which to build any deep attachment to these characters and their predicaments. Less can sometimes be perceived as more, but in the case of The Myth of Fingerprints less is simply less. 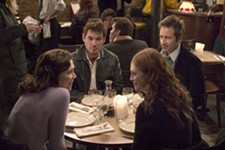