A striking debut from British director Niccol, Gattaca posits a not-too-distant future in which, thanks to the wonders of modern science, a person's genetic makeup is determined before birth. No diseases, no lazy eyes, no mediocrity, just faster, stronger, smarter all across the board -- except for the unlucky few whose parents choose to have them via natural births. These unfortunates are the “In-valids” and their lot in this brave new world is to act as the new underclass forced to roam from dead-end job to dead-end job, picking up the refuse left behind by their more perfect brethren. Vincent Freeman (Hawke) is one such person. As a child, he dreamed of becoming a space traveler and taking one of the daily Gattaca Corporation rockets to another world, but due to a congenital heart defect, it's a dream he will likely never achieve. Still, Vincent works, exercises, and studies day in and day out, and then one day he sees his opportunity in the form of Jerome Morrow (Law), an Olympic swimmer and almost-perfect specimen who's had to forego his career due to a broken back. Jerome and Vincent trade identities, causing Jerome to contribute the necessary daily samples of his self (hair, urine, dead skin particles, fingernail clippings) to help Vincent pass the rigorous testing. And it all goes swimmingly until Vincent's boss, the Gattaca flight director, is murdered and the police descend, searching for answers in literally every corner. Led by Detective Hugo (Arkin) and the mysterious Investigator (Dean), the team even searches the dust and discovers Vincent's eyelash, which places both him and Jerome in jeopardy. As if that weren't enough, Vincent finds himself falling in love with Irene (Thurman), another Gattaca employee, albeit one with a less-than-perfect constitution. Niccol's futuristic fable is a gorgeous construct, from its cast on down to the brilliant, clinical nature of the set design that reflects a future in which even a particle of saliva can be one's undoing. The world of the future is a sleek, quietly humming, extremely well-lubricated machine, full of electric cars and black suits with white shirts. Everything is painfully well-ordered. For once, Thurman's chilly visage serves her well: She's the female future perfect, all trim lines and pursed lips. Hawke is likewise well-cast, parlaying his all-American looks to good, “normal” advantage in a world where the term is an anachronism. It's Jude Law, as the handicapped, bitter Jerome, however, who represents the heart and (broken) backbone of Gattaca. He's the damaged proof that the system does not work, and as such he's Vincent's only hope, and only real friend. For all its genre-hopping (science fiction, mystery, love story, socio-political exploration), Gattaca never gets away from itself; it's firmly rooted in Hawke's masterful humanity, making this less a sci-fi epic than a simple (and simply wonderful) lesson in humanity and the direction in which one hopes it's not heading. 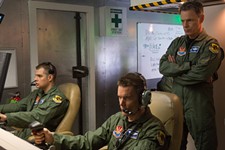 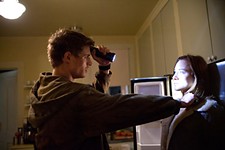