When you're in love, when you're really in love, head over heels deep into that slick red vein, there is nobody else around -- just you and her/him. Lovers exist in a protective bubble that renders them oblivious to the mundane goings-on that surround them. The same holds true for the dog end of relationships, those interpersonal implosions when all you want to do is go bang, but end up hitting your head against the same kitchen cabinets over and over and over. Greenwald's closed, two-character study of a relationship plummeting earthward is dead on target; you can hear the wind whistling between Steve (Crowe) and Monica (Hayek), and you know it's icy cold, though not from any absence of sparks. Michael Cristofer's screen adaptation of his stage play provides a darkly humorous glimpse into a place to which we've all -- however reluctantly -- been. The film is rich in both comic asides and scathing, emotional fisticuffs. Photographer Steve is a shallow semi-goon, pointedly unaware of how rewarding the two-year-long relationship with his schoolteacher better half is. He's looking at all the odd angles and seeing none of them, while Monica, for her part, is running smack dab into a brick wall every time she tries to sit down and talk about things with her beau. Cristofer has laced his script with so many scenes adapted from what must have been real-life breakups that watching the film gets to be, at times, a virtual tour of one's past. You may find yourself sitting there associating just a little too closely with various scenes and situations, and, depending on your current romantic compass, this can dramatically affect how you feel about Breaking Up as a whole. Crowe and Hayek are perfectly matched, though, there's no doubt about that. Her Latin fire and his flippant indifference to the obvious suggest a pairing that should have gone supernova some time ago. Crowe's performance here is much more subtle (and precarious) than his turn in L.A. Confidential; any more vacuously smarmy and he'd be teetering on the brink of John Cleese. In an effort to open up the inherent staginess of the material, director Greenwald employs any number of cinematic tricks to keep things from becoming too static -- freeze frames, Hi-8 videography, and bracketing asides to the audience all come into play. To what extent you can tolerate these unconventional tactics may depend on how traditional a filmgoer you are. Nevertheless, Breaking Up is powerful, catty stuff; it's as close to the real thing -- the humor and the horror -- as I'd like to get for some time. 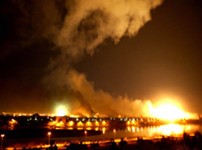 Uncovered: The War on Iraq
The filmmaker, who is also responsible for the recent documentary Outfoxed, argues that intelligence data have been manipulated by this administration to justify the decision to go to war. 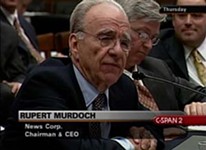