This surprisingly graceful blend of romance, cynical political satire, magical realism, and Forties road-pic shenanigans is the last major work by Cuban director Alea, who recently died of cancer. First released in 1994, it has screened at the Sundance and Venice film festivals, winning awards at both. Tobio, who collaborated with the ailing Alea on his previous, and best-known, movie, Strawberry and Chocolate, is also listed as a co-director here. However, it's generally acknowledged that Guantanamera's dominant sensibilities are those of Alea, a onetime fire-breathing Marxist zealot whose work later developed a more jaundiced view of life under socialism. Guantanamera's plot starts (but quickly roams far astray from) the traditional ballad of the same name. Yoyita (Brando), a world-famous Cuban opera singer, returns to Havana, the city she left 50 years previously. At the first opportunity, she looks up old lover Candido (Eguron), but moments into their reunion, she drops dead in his arms. Now, she's out of Candido's hands and in those of a government funeral industry regulator named Adolfo (Cruz, who also starred in Strawberry and Chocolate). Adolfo uses Yoyita's cross-country trip back to her hometown cemetery as a test of his pea-brained scheme to distribute funeral transportation costs by requiring long processions to be handled by a relay team of hearses along the way, each handing off the coffin like a baton. Tagging along with Adolfo -- a humorless, nattering twerp who bears a distinct resemblance to Daniel Ortega -- are his wife, Georgina (Ibarra), Candido, and Tony (Garcia), a resourceful driver who makes side money in the country's robust black market. The disaster-fraught journey is Alea's platform for some telling satire about modern Cuban society, where gasoline for one's crappy Russian-made sedan is a coveted luxury and the national currency ranks third in desirability behind American greenbacks and bartered fruit. The most interesting of several plotlines is the one in which Georgina gradually recognizes her marriage for the losing proposition it is and drifts into a soul-revitalizing flirtation with Mariano (played with a naturalistically sexy flair by Perugorria), a suitor from her bygone days as a college professor. Singers and narrative voice-over fill in story details and keep the narrative clipping along briskly, and Alea adds some tantalizing mystery with spectral images of a young girl who turns out to have special meaning for Candido. The whimsical, Hollywood-perfect ending brings memorable closure to a (for the most part) sweet-natured film with agreeably tart undertones. 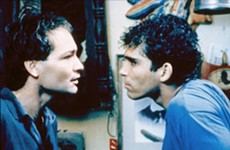 Strawberry and Chocolate
Tolerance is the main theme of this fascinating new film from Cuba. The story tracks the development of an improbable friendship between two Cuban men, ...