In the dank basements of our subconscious minds, most of us harbor a creature from a Roy Tompkins cartoon: a bug-eyed, projectile-sweating perv with a voyeuristic lust for “forbidden” images and thrills. It's this monster from the id that drives the newish film category -- first codified in Michael Mann's Manhunter (1986) -- which cross-pollinates the horror and noir crime-drama genres to offer viewers both the raw, reptile brain rush of the former and the artistic legitimacy conferred by the latter's high-style presentation. Kiss the Girls director Gary Fleder (Things to Do in Denver When You're Dead) even ups the respectability quotient by featuring a strong, nobody's-victim female character (Judd), who escapes a deranged criminal's clutches and helps a police psychologist (Freeman) track him down. Judd's role certainly flouts the genre tradition of helpless women being terrorized and slaughtered for the audience's delectation, but at bottom this story is still pretty boilerplate stuff. A suave and courtly psychotic, who calls himself Casanova, kidnaps attractive young women and imprisons them in a dungeonlike lair where they must either participate in his Arabian Nights harem fantasies or suffer grisly consequences. Judd, placing herself at risk, aids the investigation by providing insight into Casanova's twisted mind. As with 7even, Jennifer 8, Manhunter, and (by far the best of the lot) The Silence of the Lambs, sensory overstimulation heightens our gut response to the horrific subject matter. The now familiar spasmodic hand-panning, indigo-drenched frames, and drastically under- and overlit interiors are all here. It's diverting enough, and intermittently suspenseful, but also strangely empty and decadent in a way that truly merits that overused term. Basically, the problem I have with these films is that they inspire an esthetic, rather than moral, intellectual, or even visceral response to evil. Without the warm, richly human presences of Freeman and Judd, Kiss the Girls would be a wholly repellent movie. By the way, while I'm holding forth here, it is too much to ask that stylistic concerns be set aside now and then when they clash too jarringly with reality? For example, when a woman knows she has a prowler in the house, wouldn't common sense dictate that she turn the light on, even at the expense of some of the production designer's exquisitely crafted mood? But then, in films so utterly defined by style, that would be like expecting to get through a Jerry Bruckheimer-produced film without seeing any helicopters explode. 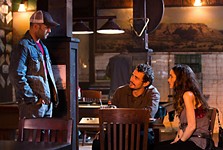 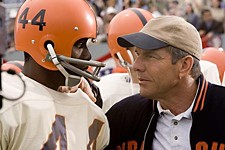