Soul Food is another way of saying: Family values, African-American style. The film is a warm and comic melodrama about family ties and the tribulations of sticking together. When family matriarch and fount of perpetual wisdom Big Mama (Hall) falls ill, her loving family begins to unravel. The story is told from the point of view of Big Mama's grandson Ahmad (Hammond), who shares a particularly close relationship with his grandmother. Sunday dinner at Big Mama's is the ritual that holds this clan together, but the dinners come to an end with Big Mama's illness. Her three daughters, despite their love for each other, bicker as always. In episodic fashion, Soul Food follows the melodrama of each sister's marriage, cutting back and forth among the stories in a way that allows us to feel warmly toward them all yet never too intimate. The dramas and crises are fairly rote and familiar stuff. And even if there might be surprises in store, Ahmad's voiceover narration repeatedly jumps in to remind us that no, no, no, there's still a heap of trouble ahead. What Soul Food lacks in narrative originality and flourish it nicely makes up for with wonderful performances by a large ensemble cast. What these actors bring to the characters makes us regret all the more that the various storylines are so rudimentary and unsatisfactorily developed. Amazingly, despite the presence of characters that we'd like to know better, the movie still feels overlong at just under two hours and terribly repetitive. Soul Food is certainly digestible fare but somewhat lacking in nutritional value. 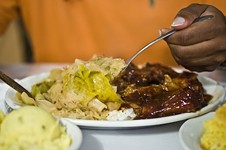 TV Review: 'Soul Food Junkies'
A documentary examining the past, present, and future of soul food 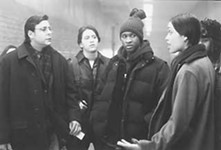 Light It Up
Judd Nelson is finally back to his old Breakfast Club stomping ground, but this time around there's guns, a wounded cop, and a media circus ...