Jane Smiley's Pulitzer Prize-winning, Lear-on-a-John Deere novel has reached the screen with its bleak and anguished spirit intact. That's a bit of a surprise considering that the last outing for Australian director Jocelyn Moorhouse was the maudlin How to Make an American Quilt. But go back to her debut film, the minor masterpieceProof, and the artistic marriage makes a lot more sense. As that dark little jewel proved, Moorhouse knows plenty about pain, betrayal, and damaged souls -- all of which figure prominently in Smiley's transplantation of Shakespeare's tragedy to the Iowa cornfields. Lear is reincarnated here as Larry Cook (Robards), a flinty old farmer who connives to avoid inheritance taxes by incorporating his business and dividing it among daughters Rose (Pfeiffer), Ginny (Lange), and Caroline (Leigh). Youngest daughter Caroline, our Cordelia figure, gets stripped of her inheritance, however, when she confesses doubts about the scheme. Soon thereafter, the old man starts sinking into a mire of boozing, depression, and senility. Ginny has an adulterous affair with a neighbor (Firth), and terrible family secrets start emerging in conversations between the two elder daughters, played with exquisitely controlled intensity by Lange and Pfeiffer. Caroline, a big-city lawyer, avails herself of the chaos to re-ingratiate herself with Larry by supporting his effort to nullify the land transfer. Smiley's story, adapted by Laura Jones, doesn't hew slavishly to Shakespeare. The key difference is that Larry, unlike Lear, isn't a victim of literal or figurative blindness, or the evil of others. Instead, he is evil incarnate, lacking only cloven hoofs and leathery wings. Caroline is an unwitting accomplice, not a wronged innocent like Cordelia, and Larry's raging-in-the-storm scene is ugly, harrowing, and utterly lacking any of Lear's mad eloquence. The best way to appreciate this film is to ignore the contrived Shakespearean parallels and savor the skill with which Moorhouse undermines the conventions of the heartland family drama. Dreamy early images of ripening grain and Robards' noble, marble-bust visage combine with a lullaby score to place the viewer in one of Hollywood's all-too-familiar Places in the Heart. Then, a trap door drops and you plummet into icy, stygian darkness where the dominant smell is sulfur, not simmering rhubarb pie. This is a hard, angry, morally unforgiving movie with dominant sensibilities more similar to the current wave of “therapy fiction” than to the classical tragedy genre. Superimposing these raw, primal emotions onto amber-hued scenes of bucolic splendor creates a satisfying tension that sustains interest even when the story veers uncomfortably close to primetime soap territory. Though not a completely successful film, A Thousand Acres is hard-hitting, original, and brimming with unwavering moral convictions and the courage to follow them to their troubling conclusions. 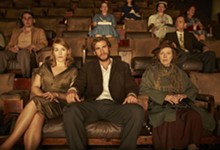