Kudos to director Curtis Hanson and co-screenwriter Brian Helgeland for whipping James Ellroy's seminal novel of 1950s Los Angeles police corruption and noir sexuality into recognizable shape for this distinguished film adaptation. Ellroy's original manuscript fell under the heading of “epic.” With over 100 distinct characters and nearly that many plot twists, it was long considered unfilmable and it languished in development hell for years, nevertheless remaining one of the hottest unproduced properties around. Now it's here, finally, and well worth the wait. Spacey plays a smooth-talking LAPD detective named Vincennes, who moonlights as technical adviser on a high-rated TV cop show; as such, he's looked up to by the regular Joes on the beat, although some police officers resent his penchant for working celebrity busts alongside Sid Hudgens (DeVito), the smarmy editor of Hush-Hush magazine, a seamy Hollywood scandal sheet. Together with the straitlaced, rising LAPD star Ed Exley (Pearce) and the violent, emotionally confused detective Bud White (Crowe), Vincennes falls prey to a series of internal police scandals revolving around a recent massacre at the aptly named Night Owl Cafe on Hollywood Boulevard. As the body count mounts and the internal affairs intrigue spirals out of control, this trio of good cops/bad cops furiously works to cover its collective ass before the perilous house of cards that is the 1950s LAPD collapses atop them. You come away from the film with the distinct feeling that it should have been shot in high-contrast black-and-white; echoes of classic film noir crop up in almost every scene, but cinematographer Dante Spinotti's (Heat, Last of the Mohicans) lush colors and steamy atmosphere more than make up for that. Like the best dirty cop procedurals of the past, L.A. Confidential chugs along like an approaching thunderstorm, ratcheting up the dirty dealings and hazy suspense at an alarming rate until the final, hideous confrontation. Just when it seems things can't possibly get any worse for the fallen angels in blue, things do, and the film jacks itself up to another brutal level. Full of period locations, costumes, and one very clever Lana Turner gag, it's easy to see why Ellroy is so pleased with the film. It's tough enough adapting run-of-the-mill Michael Crichton books to the screen -- with a sprawling tome like Ellroy's, results such as Hanson's are downright miracles. 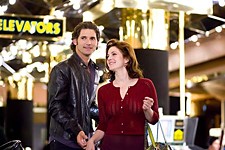 Lucky You
This romantic drama is set against a Las Vegas background and stars Eric Bana and Drew Barrymore, but it rolls snake eyes all the way.