Steven Seagal strikes me as the least interesting Zen Buddhist, environmental activist, country music-playing martial arts movie star imaginable. But my opinion is clearly in the minority, and this latest entry in the ponytailed face-crusher's curriculum vitae will surely pack `em in with the same brutal efficiency as previous hits such as Under Siege, Hard to Kill, and On Deadly Ground. This time around, Seagal plays Jack Taggart, an Environmental Protection Agency marshal sent to investigate reports of illegal toxic waste dumping near a remote Kentucky coal mining town. Despite his cover identity as an itinerant carpenter, he stands out glaringly in the tiny village (that wardrobe of foppish Adam Ant fringed leather outfits, perhaps?) and is soon being menaced by goons who work for villainous polluter Orin Hanner (Kristofferson). These thugs, needless to say, are pulverized as effortlessly as so many Easter chicks. This is a problem I've always had with Seagal's martial arts sequences; there's seldom a nanosecond of suspense, and the fight choreography has all the sophistication of Seventies drive-in fare such as Billy Jack and Walking Tall. Of course, some narrative spackling paste is needed to fill in the gaps between the beatdown sequences, and this thankless role is handled by Helgenberger, who plays a beekeeping spinster romanced by Taggart. Kristofferson continues his recent trend of sinister power broker roles with a cartoonishly amusing turn as Hanner. Other singers-turned-actors, including Randy Travis and Travis Tritt, appear in cameo roles. Stanton, meanwhile, turns in a rare onscreen singing performance, and Seagal extends the artistic cross-training theme by jamming with a country band. What we're talking about here is strictly novelty value, though, and for me that's about all this movie has going for it. I still consider the whispery-voiced, beetle-browed Seagal a complete cipher and perhaps the most baffling box office draw in film history. Fire Down Below offers the grimacing hulk little support with a hopelessly implausible plot and odd production touches such as a musical score which occasionally juxtaposes Mississippi Delta blues with Kentucky mountain scenes. There's also a curiously high incidence of anal penetration jokes for such a bull-necked macho action flick. But enough; for the faithful, my scornful nattering will be as locust chirps in the remote distance. All I can realistically hope is that I'll never turn on the radio and hear Seagal and Merle Haggard dueting on “The Fighting Side of Me.” 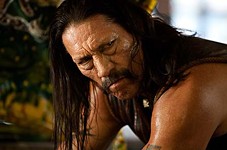 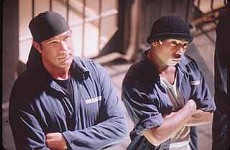