Bill Duke's take on the Harlem numbers racket in the early Thirties is so clichéd that you half expect Paul Muni to pop up every now and then. At the very least, Hoodlum might have been better off had it been filmed in monochromatic black-and-white instead of the garish color palette (and plenty of gore) that Duke opted for because they, unfortunately, only reinforce the hamminess of the picture. Fishburne plays the historical figure Ellsworth “Bumpy” Johnson, a low-level street thug just released after a stretch in Sing Sing, who finds himself running the numbers when Harlem's longtime “Queen,” Stephanie St. Clair (Tyson), is jailed in a power play by rival mobster Dutch Schultz (Roth). Bumpy and his motley crew -- childhood friend Illinois Gordon (McBride), the ominous, horribly scarred bagman Whispers (Benjamin, late of Repo Man), and the Queen's bodyguard Tee-Ninchy (Eddie “Bo” Smith, Jr.) -- must take on not only the megalomaniacal Schultz, but also the suave, sleepy-eyed Lucky Luciano (Garcia) and their gangs of ice-pick wielding toughs who appear to have stepped whole-cloth out of the Coen Brothers' Miller's Crossing. On top of that, Bumpy finds himself falling for Francine Hughes (Williams) the gorgeous but highly opinionated head of the local NAACP chapter, and she in turn falls hard for him. Fishburne plays this “black Godfather” as a Harlem variation on the Robin Hood theme -- after liberating Schultz's numbers winnings one day, he promptly drives downtown and begins heaving fistfuls of cash into a startled and starving crowd. Annoyed at the Dutchman's incursions into the Queen's territory, Bumpy and Illinois quickly scam their way into Schultz's Bronx beer warehouse and blow it up. It's Hell Up in Harlem all over again, with Bumpy and his crew showing up at the all-white Cotton Club and demanding that Schultz and, by default, Luciano back off and respect the boundaries of their power. No such luck. Duke keeps things moving fast and furious, peppering his film with the requisite Tommy gun shoot-outs and the occasional massacre. But this is really Bumpy's story, and Duke apparently feels he needs to play up the romance between Francine and Bumpy as much as possible. It doesn't work. The only thing that does work, really, is Roth's creepy turn as Schultz. He plays the Dutchman as a fancy-pants rube, all greasy hair and badly tailored suits, eager to crush everything in his path but never quite sure how to do it without offending the debonair Luciano. Roth plays it for all it's worth, but even his edgy performance can't save what is essentially another retelling of a generic gangster story that's been told too many times before. Despite Duke's best intentions here, I suspect Ellsworth “Bumpy” Johnson will remain a footnote in the pages of NYC gangster lore. 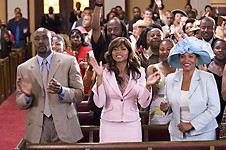